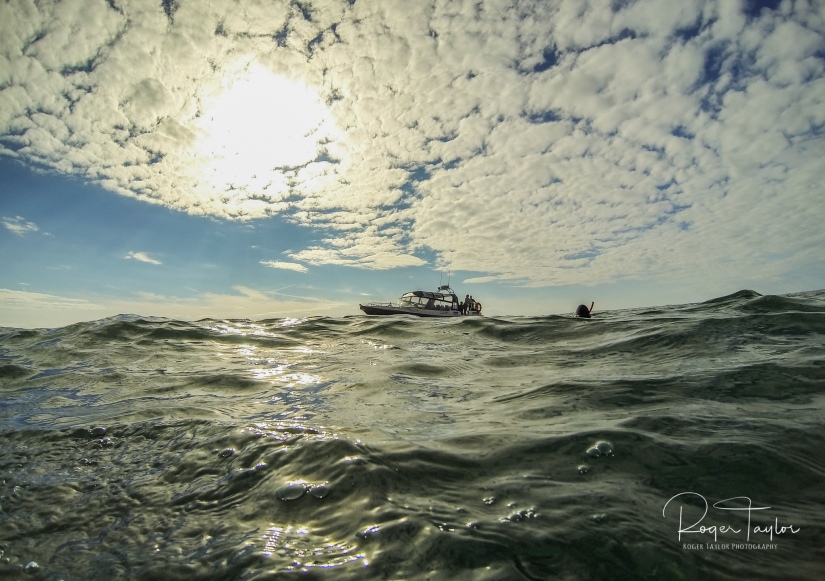 Last year we had a holiday. It wasn’t just any ordinary holiday. It was to be Our Most Grand Adventure.
We went on a Road Trip that will stay in my memory for a very long time. We went in Bertha – Rogers cosy campervan. She was to be our home for two glorious weeks. The whole trip was based around two days swimming with Basking Sharks off of the Isle of Coll, West Scotland.
We had planned the trip for about 6 months, swimming in the Lakes on our way up to Oban which was totally Amazing in itself, producing many adventures and experiences which I hope to share with you – if I don’t bore you first.
But no amount of planning could prepare me for the actual event. I was quite calm and collected on our way out to sea in search for the Basking Sharks. I was quite calm and collected when we stopped a couple of times to watch Dolphins and spot the Sharks and Seals. But when we actually stopped and it became time to put the wetsuit on and prepare ourselves, well, the calm left me.

We had pre hired my wetsuit, and everything that went with it and it was all waiting for me on the boat. Roger already had his own little sexy, light grey and purple number he slipped on, along with his never tried before alien looking snorkel mask, that covered his face (I’m going to refrain here).
Everyone else seemed to know what they were doing, they must have done, they all managed to put their wetsuits on without any fuss.
By this time, my stomach was churning. The boat was bobbing about on the Ocean (Oh My God! The Ocean! No bottom for my feet, well, not that I could reach – obviously – and no hand rail to grab hold of – but don’t think about that Ange, just focus).
I tried so hard to put the wetsuit on. I was getting more and more flustered, Roger was concerned I was taking too long, he didn’t want me to miss any opportunities – this didn’t help me. I just could Not get the blooming thing on. The others were trying not to watch, I was becoming more and more flustered and I didn’t feel well. In the end I had to resort to using conditioner (made my skin lovely and soft though) to help it ‘glide’ on, up my legs, then tuck the bum into it. I finally got it on ( even typing this and thinking about it again I have to take breaths) it was so incredibly tight. It came right up my neck, I had to pull down to get it away from my throat. It just made me panic. Luke, the fantastic guide, saw I was struggling and uncomfortable, he just reached down and pulled the zip down a bit – well, what a relief! I wasn’t going to suffocate after all!  I tried to keep calm, I thought I was going to be sick. In the end I just sat down at the end of the boat and tried to relax and look at the horizon. The others were all putting their fins on and getting their snorkels ready and adjusted. The plan was to get in the water in groups of 4, 2 on each side, sitting on the edge, waiting for the signal from the pilot that we were in the right spot. I wasn’t going to be in the first group. When the signal came the group slid into the water as silently as they could, the boat then moved away and the people left on the boat would do the spotting, pointing out the direction of the Basking Sharks to the guys in the water. I’m not sure if Roger got in with the first group. I think he did. I wasn’t really taking any notice to be honest. I was trying to calm myself and give myself a good talking to.
I’m not sure at which point I decided to get in. I’m not entirely sure I made the decision. I knew how much it meant to Roger that I experienced this, after all, we had been planning it for months.
I think this was the reason alone that made me complete the outfit by putting the hood on, the gloves, boots and the snorkel and fins. It was this reason that got me to sit on the edge of the boat, my mouth full of snorkel, face squidging out around the mask and it’s not a flattering look I have to say.

But to this day I’m not sure how I got in. I was Ab – so – lutely terrified. I sat there, gripping Rogers hand so tight and just looking at the water – apparently it was calm, to them maybe! But not to me. While we were sat there, the other boat that was part of Basking Shark Scotland came across to us. Shane Wasik was on this boat, he had come over to say Hi to Roger, they had shared the Epic Iceland trip where Roger had done his Ice Mile (Basking Shark Scotland also arrange the Iceland trips and trips to swim with Orcas). I would have liked to have said ‘Hi’ but I think I only managed a grunt.
When they had left us the time had come to get in. Wow. The months of planning had come to this point. I sat there, thinking, “you don’t have to do this you know, you can just get back in the boat”, but I knew if I didn’t get in I would regret it forever. How many times do chances like that come up in a lifetime?! Besides, I’d turned 50 earlier in the year and something clicks in your head – time is ticking – take every chance you get – right?

The signal to get in came, Roger got in (not entirely splashless as we were supposed to)….I followed – splosh! I really didn’t like it, I was incredibly uncomfortable. I tried some sort of swimming stroke, if you could call it that, I think I’ll call it the survival stroke, to manoeuvre myself to where everyone else was – I’m not entirely sure I moved at first, I think the boat moving away gave the illusion I was . I had absolutely no clue where everyone else was. My bum was doing it’s usual trick, bob bob bob and my brain hadn’t clicked that I could put my head in the water and breathe (you know I’m blonde right?), I must have found them, the swell was huge to me, I had no control. I must have eventually put my head in the water to look at a shark that was passing by because all I remember then was my mask filling up with water (I hadn’t got it sealed against my face properly) and going into a blind panic. Where was the floor, the handrail, anything to grab onto. Then out of nowhere came Roger (he was just missing the cape and pants on the outside), he grabbed hold of me and tried to help me with my mask. We actually have video footage of it as Rog had his GoPro on his wrist. Watching it back even makes me feel the panic again.
After that, I somehow made my way back to the boat, there was no enjoyment for me then (if there was in the first place!) I was quite literally out of my depth. I climbed, very unladylike, onto the boat and there I stayed for the rest of the day.
I was quite happy, watching everyone else taking their turn getting in and out every time we came across some Basking Sharks. I was even lucky enough to see a Basking Shark do a full breach, it made me scream out, I couldn’t believe it!

Even though I was happy spotting for the swimmers and watching them I knew that Roger was disappointed. Disappointed for me, that I wasn’t experiencing it all for myself.
So when it came to the last group of the day, Luke, the fantastic guide, who had been asking me each time if I was up for getting in again, but had not put one jot of pressure on me, asked me again if I would like to get in. It took me a split second to say yes. I turned round and saw Rogers face – it was beaming – that look alone made it all worth it for me.
Because I had kept my wetsuit on most of the day I had become more used to it, so all I had to do was put all of the accessories back on.
I slid in again, this time Luke said to Rog that he would look after me so Roger could go and do what he wanted. He was great, kept hold of my hand, took me in the direction of the Sharks, I felt so much calmer, I saw the Sharks – totally, incredibly amazing. I stayed in for quite a while. Felt more confident that I wasn’t going to sink – mainly thanks to my bum of course – so I was able to begin to enjoy it. 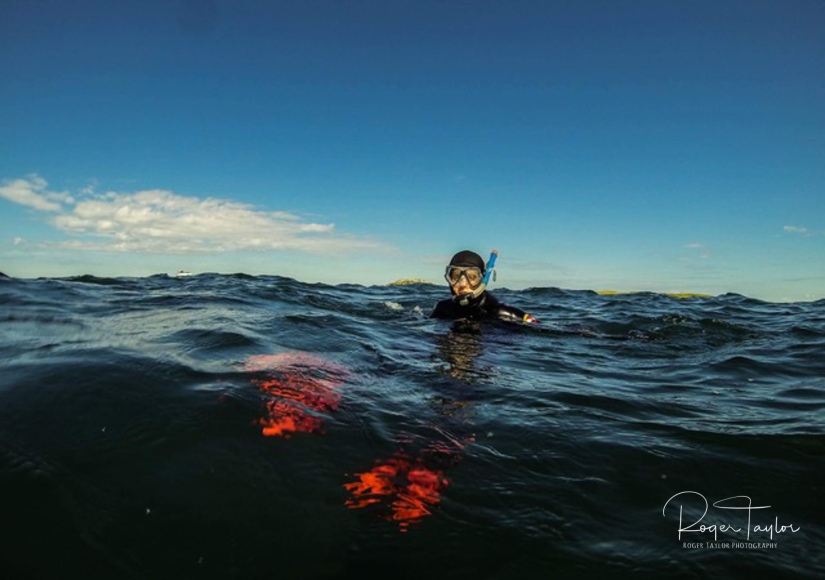 When I got out I felt ab – so – lutely bloody fantastic, couldn’t stop smiling. I am so very glad I got back in because it meant I ended the first day on a high, I knew I would be able to get back in the next day. But at the time I didn’t know what challenges lay in wait for me the next day. I thought I’d dug deep already, but oh boy, it was the tip of the Iceberg!