So, day 2 of our Basking Shark experience arrived, after a very welcome sleep in our hotel – The Coll Hotel – and an even more welcome breakfast of, perfectly cooked, poached eggs on toast, we made our way to the pier to meet up with the boat and the others on the trip.
The weather was perfect for us again. Blue skies and sunshine – in Scotland! It was simply stunning. The sea was just mesmerising, the sun dancing on the swells.

I was still buzzing from getting back in the water the day before so for me, the pressure was off. I’d already had a swim with the sharks so if I didn’t get back in I had already achieved that.
We all got settled and the boat set off. The plan was to go to where we left off the day before, looking out along the way for any sightings of anything.
We followed the coastline, rugged and interspersed with beautiful sandy beaches, so perfect you could believe you were in the Mediterranean
It wasn’t long before we spotted Dolphins. Luke said if we were lucky they would swim along with us, they must have been a little shy as they kept their distance, but we still saw them having a play and Roger was able to capture some shots of them.

We eventually made it to around the same area we had been the day before. There they were. The Dorsal fins a great giveaway. It’s like they are following a grid pattern, mouths wide open, taking in the Plankton, stopping and turning to go back the other way.

Everyone got suited up – even me, going straight for the conditioner, no struggling today! We all took it in turns to have time in the water. Even after seeing them the day before it still came as a shock when they just effortlessly emerged from the (only slightly) murky water, coming right at you. It seemed more relaxed today, we all knew what was necessary – get everything on, sit on the side of the boat and then slide in when given the signal. Sliding in as silently as possible was important as they would hear us and we didn’t want to scare them away.

After a while it was decided that we would move further round the coast. They wanted to take us to a ‘secret beach’. Well, this just sounded perfect to me. Having seen the beaches from the boat I was quite excited to be actually landing on one.
We went to a less sheltered part of the coast, it was what I would call the ‘real sea’, looking to the right was land and looking to left was nothing, just sea – I preferred looking to the right.
Luke and the pilot had a discussion about which beach we were going to. I was looking to see where the beach was they were talking about – I couldn’t see one – at least not one that the boat could get close enough to for us to hop off and paddle to the beach. I soon realised why this was. There was no way the boat could get close to the beach they were talking about!! Holy Crap on a Cracker!! We were going to have to swim to it!! Or snorkel to be more precise. Were they mad! They wanted us to willingly get off the boat in the really deep part of the ocean, with huge swells, then snorkel between rocks. Of course, everyone else seemed to take it in their stride. I think Roger may have seen the look on my face – one of sheer terror.
We had to go between the cliff rocks on the left and an island of rocks, with the waves splashing against them. This was just getting scarier by the minute, going against everything I had ever thought was the sensible thing to do when swimming near rocks – that is to Not swim near rocks and get bashed against them. The icing on the cake was being told to swim as close to the cliff as possible as the current going into the cove was quite strong, so strong that if you got caught in it it would take you round the island of rocks and spit you out around the other side in the big blue ocean.
Luke explained what I had to do. Just to keep my arms to my side and open and close my legs as opposed to up and down. I got in, it was like getting in for the first time again. He stayed with me for a bit then I don’t know where he went, I was just so focused on what I was seeing as I was floating on the surface, like a leaf (with a buoyant bum) being carried along, it was just so beautiful. There was a possibility of seeing seals swimming below us so I was keeping my eyes peeled. Roger came alongside me at one point, with his GoPro, I gave a little wave and a thumbs up and off he went.

I was so engrossed in what I was seeing, the plant life like underwater forests, two crabs scuttling along on the sand between the seaweed, it all made me smile, even with my face squidged in my mask, until I realised that I had gotten caught in the current we were told to swim away from. A hand came from nowhere and grabbed me and guided (can you be dragged underwater?) out of the current that I had managed to get stuck in. Once Luke had got me out of the current I surfaced and looked up. There was the beach. Oh Wow! It was stunning. White sand, blue sky – was this really Scotland. Everybody else was on the beach. I quickly discovered that you can’t walk with your flippers on, well, not forwards, so I turned around and walked backwards until I could take them off. I’d lost Roger. He landed eventually, he’d also got caught in the current, I think it took him quite a way, luckily he’s a strong enough swimmer to get himself out of trouble (we have video footage of this, if you suffer with motion sickness it’s not a good one to watch!).
We all had a little wander around, we didn’t have long. I walked up onto the grassy dunes and just stood and stared. I looked back at where we had come through, between the rocks and I couldn’t quite believe it.

After a while we had to make our way back into the water and swim to the left of the island of rocks, this time allowing the current to take us out of the cove – what a current! The boat was waiting for us, we had to make our way round to the other side, grab hold of the rope ladder and take our flippers off before climbing up. Unfortunately, Roger took his flippers off before grabbing hold and got taken away, right round in front of the boat, with quick thinking he was able to put his flippers back on and make his way back to the ladder.
Once we were all back on board the boat we headed back round the coast. We stopped and had some more dips and watched the Seals watching us – so cute. Roger took a break from the water and got his drone up, took some video footage and some still photos. 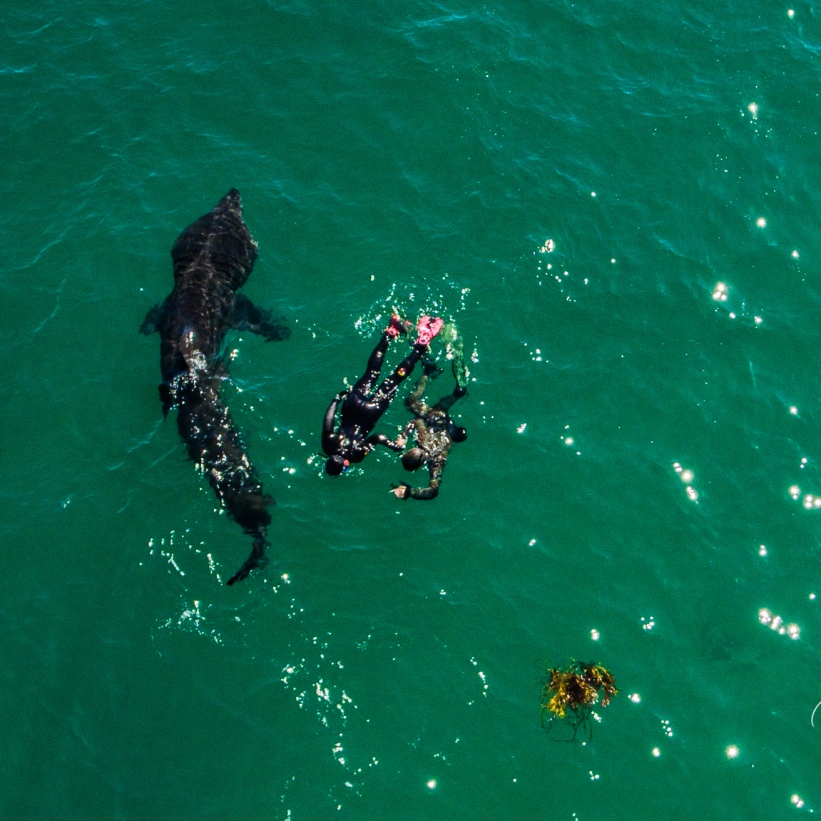 The time came to head back to base. Everyone was pleasantly shattered. We landed at the pier where we had met earlier in the day. We said goodbye and gave huge thanks to the guys for the most amazing experience ever. How lucky are they that they do that as their day job!

It is a memory and an experience I will remember for a very long time. It is an experience that even now helps me do things that I don’t feel comfortable doing, things that I don’t believe I’m capable of. But I just take myself back to sitting on the side of the boat in a wetsuit for the first time in my life and jumping into the ocean, with the thought in my head that “this opportunity won’t come round again – just do it”.