My first ever visit to the Lake District was to be a memorable one.
We arrived in the morning, in the rain, in August. This fact didn’t detract from the beauty around us. Everywhere was clean and fresh. All of the gardens seemed to be well kept, manicured and well stocked with beautiful specimens of plants, shrubs, trees and flowers. I was most impressed with the stone walls along the road side, with the lush green ferns growing in the cracks. Driving through the whole area just seemed to make me smile.
After our breakfast in Homeground (a cafe recommended by a friend of Rogers) we drove to Ambleside to do a bit of shopping and have a mooch about. The plan for the day was to have a dip in a Fairy Pool and be at the finish for a friend (Jody Jones) who was swimming the length of Windermere – as you do – then to make our way to our campsite, which would be home for 3 nights.
After spending a bit of time – and money- we had a coffee and then headed out to the Fairy Pool. Roger had been there before, I believe the temperature was 2 degrees in the water for him that time. Apparently it is up a path from Chesters but I didn’t make it there on this occasion.
We parked Bertha on the roadside and got changed into our cossies. Now, whenever we start to get ready to dip the nerves always set in for me. I think part of it is the unknown. I like to know what to expect, I’m always asking questions and Rog does his best to answer – but he’s a bloke, its a challenge for him to remember details and it’s details that I need.
It’s an odd feeling, walking along with your costume, robe and waterproof feet on, passing people and acting like there is nothing out of the ordinary happening – don’t mind us, we’re just going to jump in the river!
We followed the footpath, the river on our left, the river that was flowing quite fast with all the rain – but I mustn’t think about that, focus on the beautiful trees Ange, the canopy, anything but the water.
We eventually turn left and walk onto a little viewing platform where you can really see the raging torrent!! Great!!
Roger carries on, robie flowing behind him – just needed a staff and he would have made a great Gandalf – off to the left, clambering over moss covered rocks, picking his way through. I followed, holding my robe up out of the way, I could just see myself face planting the rocks. It was a bit tricky in places. We rounded a huge rock, roger had stopped near the waters edge. I just stopped. Stunned. It was beautiful. From the moss covered rocks, the little flowers in the cracks, the beautiful green, to the lush leaves and the ferns.
Of course, Rog wastes no time. Off comes the robie, camera ready and off he goes, into the water, picking his way carefully. Me, I just stand there. Not sure what’s going through my head – cold, wet, water, danger. I eventually de robe and dip a toe.
By this time Roger is in. He constantly talks to me, reassuring me it’s ok. I get quite stressy, it comes from the fear. As the holiday progressed it seemed to be something I had to go through each time but each time it got a little easier, I learnt how to talk to myself – having brought up 2 children that are now 19 and 21 I was already a dab hand at this!
Rog told me exactly where to put my feet, where the easiest rocks were to step on and where it got deep.

I stayed close to the rocks so I could grab hold of something – anything – if necessary. I eventually ran out of rock. I looked around the corner and saw a waterfall, the water was moving quite quick with a bit of force. Rog had gone over to another rock where he said he could put his feet down.
I took the plunge. I went for it. Ooo Ooo ah ah oo wow it was chilly! It was FAB!! Wow!! What a feeling. I made it to him and just grabbed hold of him and found a foothold. I stayed there. I didn’t move. I had visions of being washed away. Rog had a bit of a swim but it was quite tough. He decided he would go back and get his iPad Pro with it’s new waterproof case, which was yet to be tested, and take some photos on it.
It was lovely just being in there. It was a truly magical feeling. Very funny when you look upstream and see people all bundled up watching you. We gave them a wave, they waved back – it’s ok we aren’t completely mad! (not completely anyway).
Eventually it was time to make our way out. I was quite sad. I found myself taking my time, just to make it last that little bit longer. When I got out I had a bit of a Ta Da! moment – well, I think it called for it! The first dip of a very watery holiday! 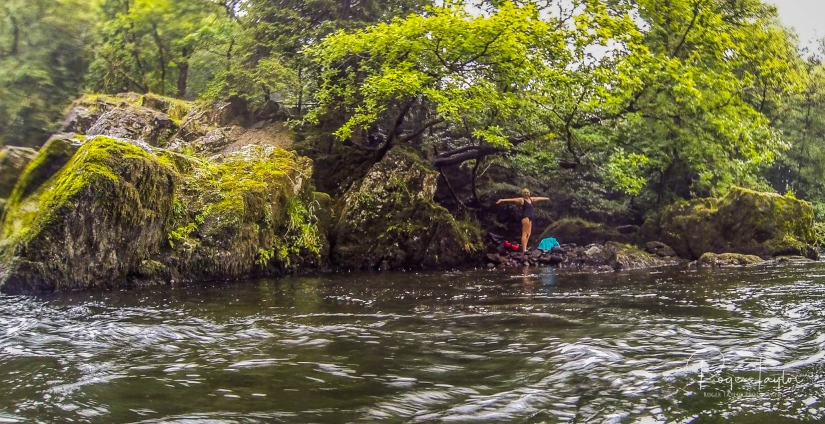 After we put our robies back on and as we started to make our way back, I stopped and looked back and quietly said, under my breath, a little thank you to the fairies for letting us safely dip – it was very kind of them.
I am a different person after the dip. I felt wonderful. I’d achieved something. Wow! Something I never would have thought of, I would normally be one of the people bundled up watching the crazy ones in the river.
It was lovely going back to Bertha, getting dry and dressed, putting the layers on and slowly getting warm.
It was still raining, but do you know what, it really didn’t matter.
We made our way back to Ambleside where Jody was expected to land. We parked up and walked out onto the jetty with the binoculars and spotted her and the boat straight away. I will always be amazed and in complete Awe that someone could achieve something like that. To keep going for all that time – 7hours 30 seconds, 10.5 miles. The sheer strength in body and mind is incredible along with the drive and the need to complete it.
Needless to say when Jody came out of the water her face was beaming. We congratulated her, Roger took some photos then we left her to get herself sorted and join her family.
We made our way back to Bertha and set the Sat Nav for the campsite and off we went, ready for the next adventure.

2 thoughts on “My First Fairy Pool”