On our Dunebuggy trip (That Was Totally Awesome Dude) we had stopped at the Dunas de Corralejo for a little look. We had been met with white sands, bright blue sky and a deep blue sea, the blue so intense you could lose yourself in it by just staring at it.

It had been a taster and now I had a car I was able to take myself off to it for a proper look.

Parking wasn’t a problem, no pay and display here, just pull up on the side of the road wherever you fancied.

I had my cossie on already with a sarong over the top, I put my water shoes on as I thought it would be easier to walk across the sand, grabbed my backpack and off I went.

It wasn’t a massive walk to the beach, down, then up and over the dunes. I videoed as I got closer, I wanted to remember what it looked and felt like to see it for the first time. When we’d been there with the buggys we hadn’t actually made it to the beach, just to the top of a dune. So this was going to be the first time.

I love seeing the sea for the first time. Ever since I was a little girl (not too long ago I’ll have you know!) we played a game in the car on our way to the coast – the first one to see the sea gets 5p. I remember trying to get the words “I see the sea” out so fast to beat my sister. I don’t recall a 5p ever being given, but that wasn’t the point. It was just so exciting to be going to the coast. This feeling has never left me. I love it. So much so that each time I see it, it moves me to tears. I have no idea why. It’s always emotional, every time.

This is why I videoed this time.

Coming up over the dune and seeing it and getting closer and hearing it – utterly priceless. Even as I’m typing I’m looking forward to being beside the sea, a sea, again. It has quite a draw for me, which is odd because if anyone has read any of my earlier blogs you’d know that I have a bit of fear for water. But being beside it is different to being in it – obviously!!

I stared at it for a bit then had a little paddle. It was beautiful.

Now, all the while I was doing this a little battle was going on in my head. I desperately wanted to go in it properly but I’d never been in on my own. I could hear my mum saying – don’t go in on your own, be safe, be sensible – so like all good rebellious daughters off came my sarong and in I went. After all, it was one of those times I had to think – if you walk away you will regret it.

Oh my goodness it felt absolutely fabulous!! I smiled, I laughed out loud, I splashed – it was fantastic. The waves came in, some quite small, others with a big swell which made me squeal in delight!

I didn’t go out of my depth, I’m not stupid and I have a healthy respect for the water. I had bought a waterproof camera for the occasion and I began taking photos – which was interesting without my glasses on, I didn’t have a clue what I was taking. 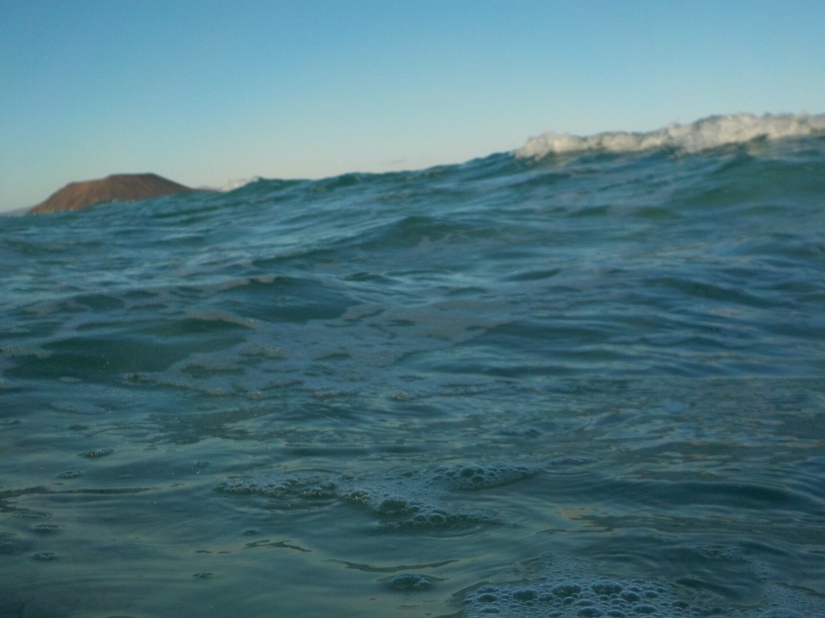 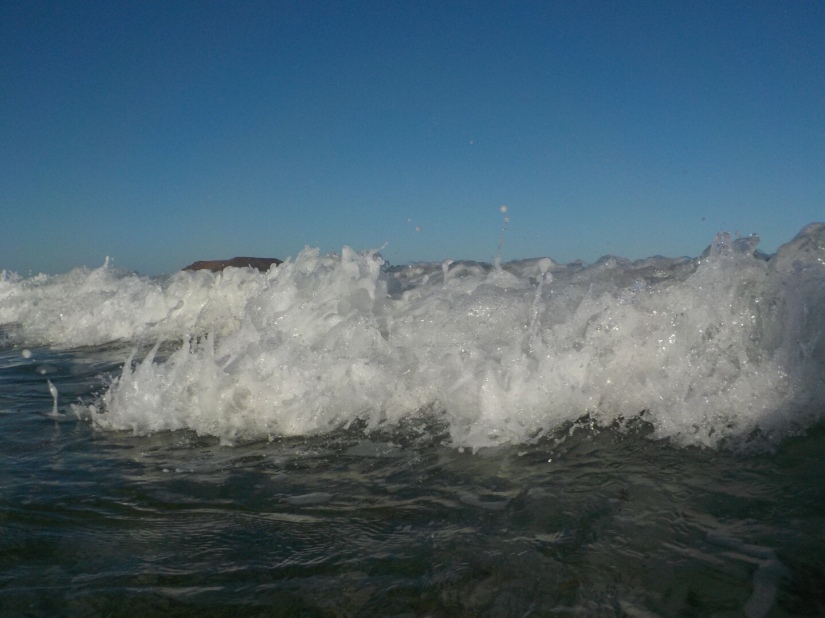 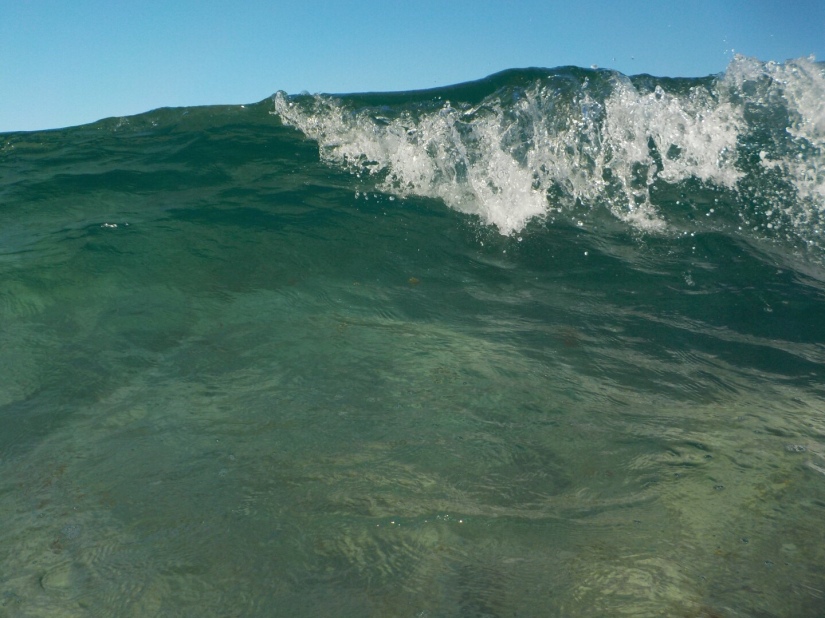 I have no idea how long I was in for. It was lovely and warm, it was warmer being in than out. Each time I thought I’d better get out I turned and walked back in again.

All this. On my own. Felt fab.

I eventually got out and grabbed my towel, wrapped it round me and sat on my coat – with a huge grin on my face. I just sat and watched. The waves. The birds. People passing by. The kites. Just taking it all in and feeling very peaceful.

I did the obligatory photo of the legs and feet and wrote my name in the sand – standard practice isn’t it?! 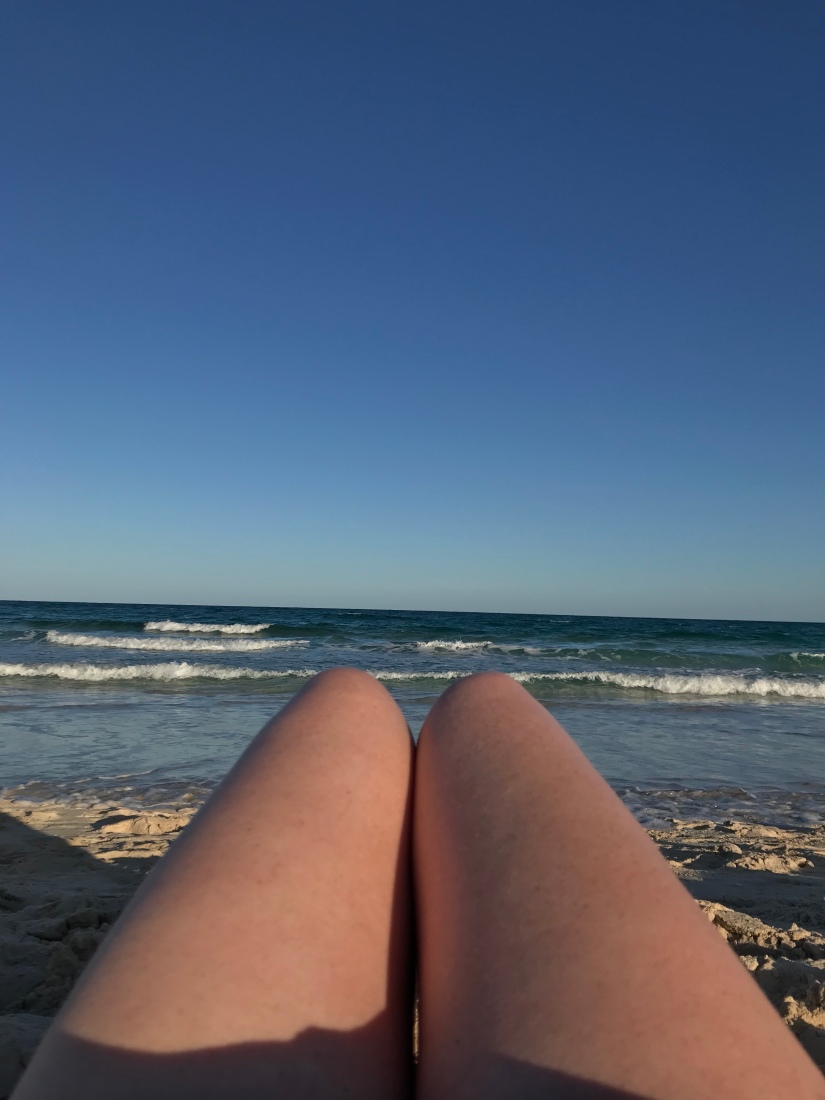 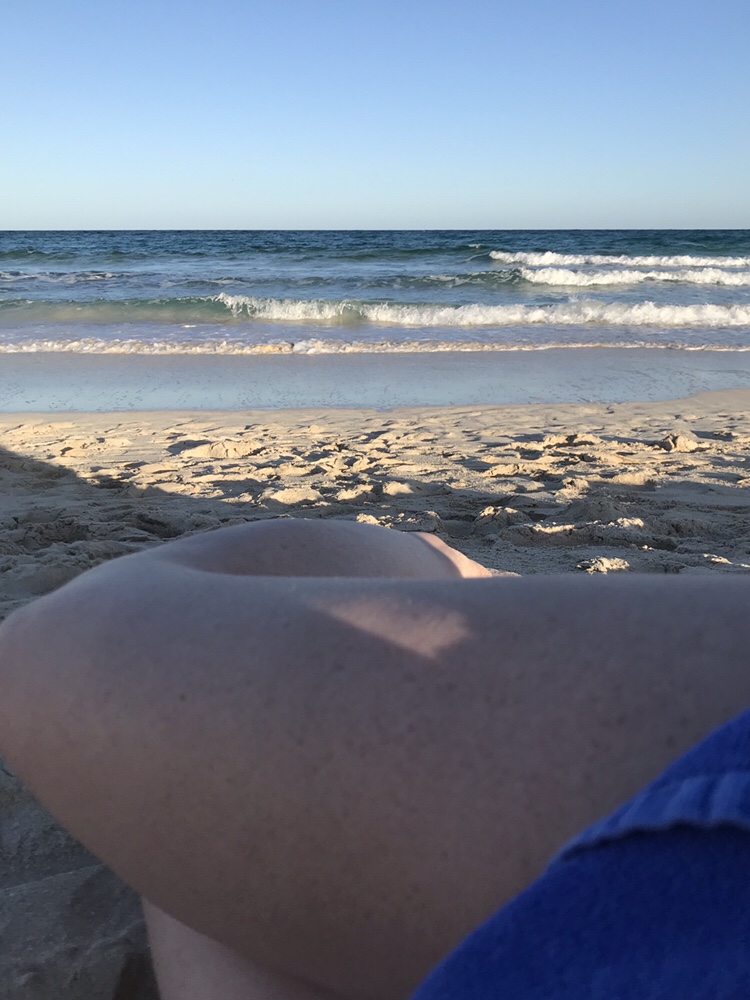 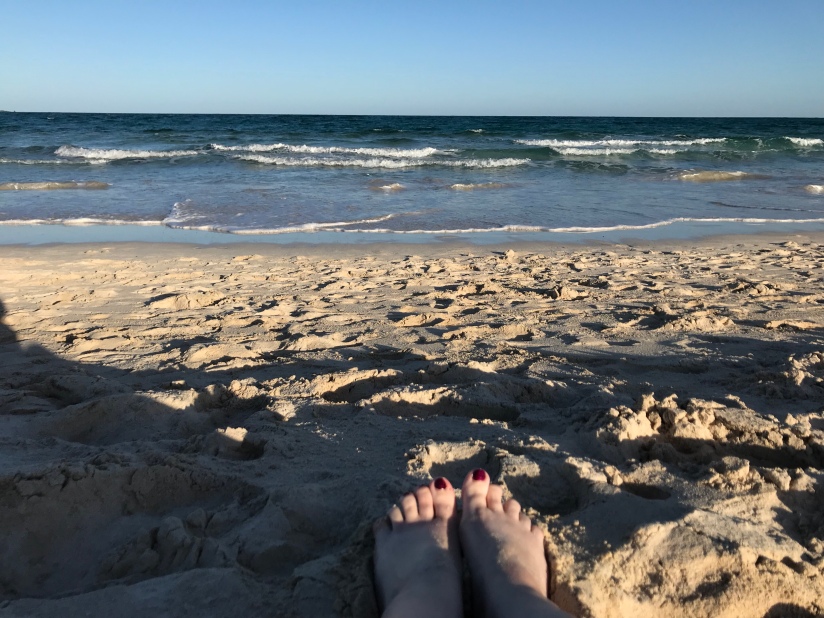 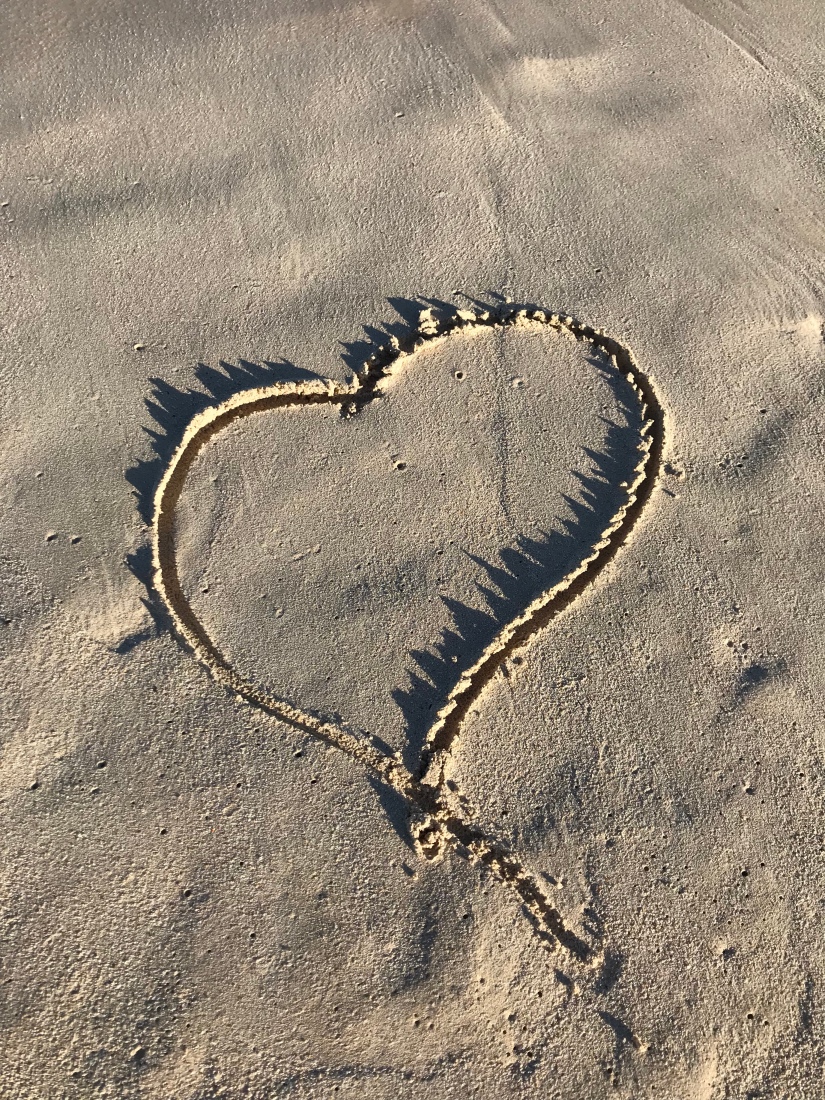 The sun was going down. The light was changing on the water. I was getting chilly, I put my coat on and carried on sitting for a while. I really didn’t want to leave.

But leave I must, it was approaching dinner time and I was hungry and I had to get ready.

I hate turning my back on the sea. I have to keep stopping for ‘one last look’ as if I’m never going to see it again.

We should treat everything like that because you just never know.

I walked back to the car, wrapped in the towel and covered in sand. It felt great. I could get used to this quite easily. This kind of laid back life. 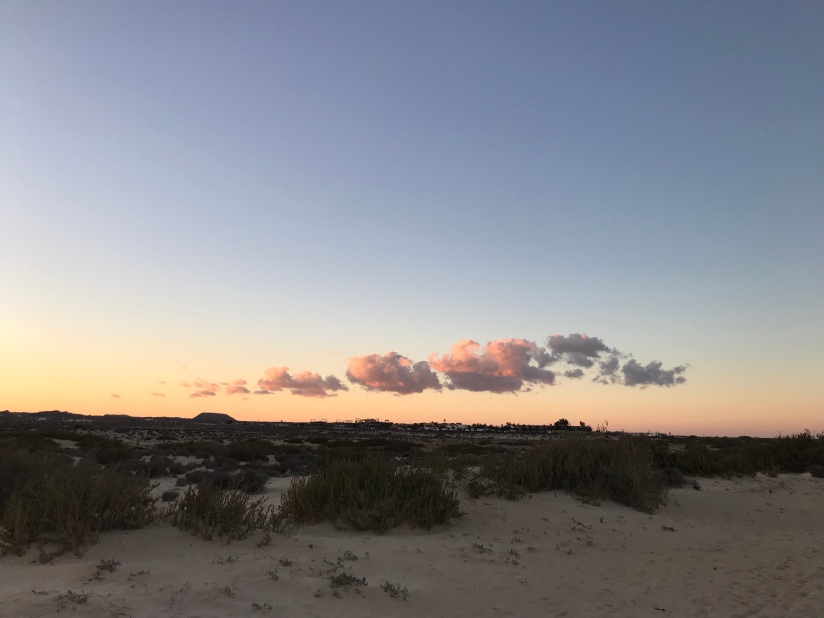 I looked in the car mirror, my hair was a mess but I really didn’t care, my freckles were more noticeable and my eyes were shining.

I really can’t describe how incredible I felt.

It really pays to push yourself out of your comfort zone sometimes. It can really make you feel alive – and feeling that alive was a feeling I hope I remember for a long time, if I do, it will remind me that I can do anything I set my mind to – our limitations come from our minds.

We have to believe we can do whatever we want to do. I want to keep feeling alive. I have to. Now I’ve experienced it there is no other option.