Well I was sad to be leaving. My boys, not so much, a newly qualified driver was desperate to get back to his car and there are only so many games of uno you can have with your Mum!

We had to be checked out by midday and we weren’t being picked up until 6 pm. The hotel said we could still use the facilities and keep our all inclusive bands on. We put our luggage in the secure room and went and had a drink at the pool bar while we waited for lunch.

After lunch I couldn’t bear the thought of hanging around waiting so I walked to the nearest bit of beach, following Max who’d left a bit earlier.

When I got there he was clambering over the rocks near the waters edge, looking a bit wobbly, so naturally I got my phone out and started videoing – just in case!!

I walked along the sand a bit and found a sandy stretch that I could paddle in. Off came the shoes, tied the laces together and slung them over my bag. I rolled up my jeans (it reminded me of Tintagel and Merlins Cave only I didn’t have my water shoes with me) and started to paddle and search for creatures. 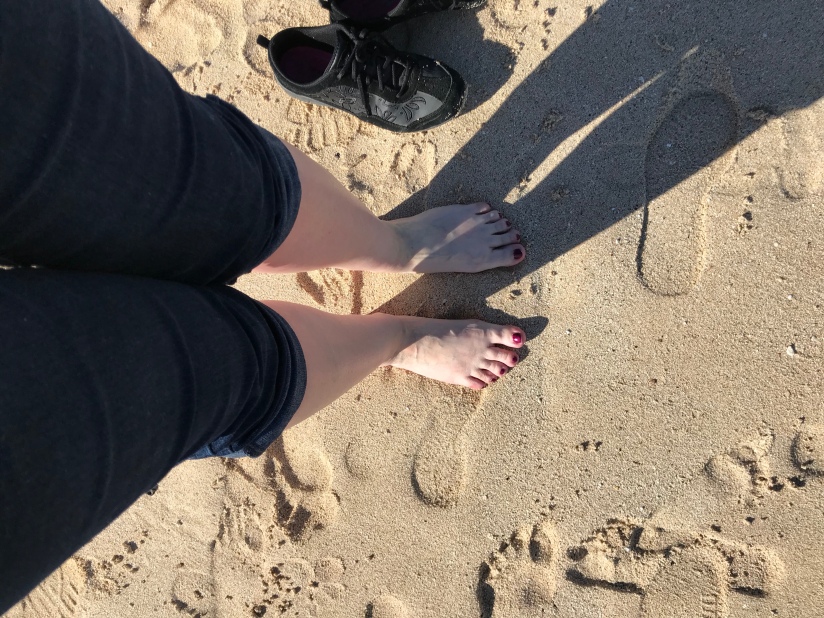 It was so lovely I was glad I’d walked down there.

Max made his way over to me and started clambering over some bigger rocks, lava to be precise. I noticed a plastic bag on them and asked him to pick it, he gave it to me and I then started to notice more bits of plastic. I decided I was going to do a bit of a clean up, after all, I had some time to kill. 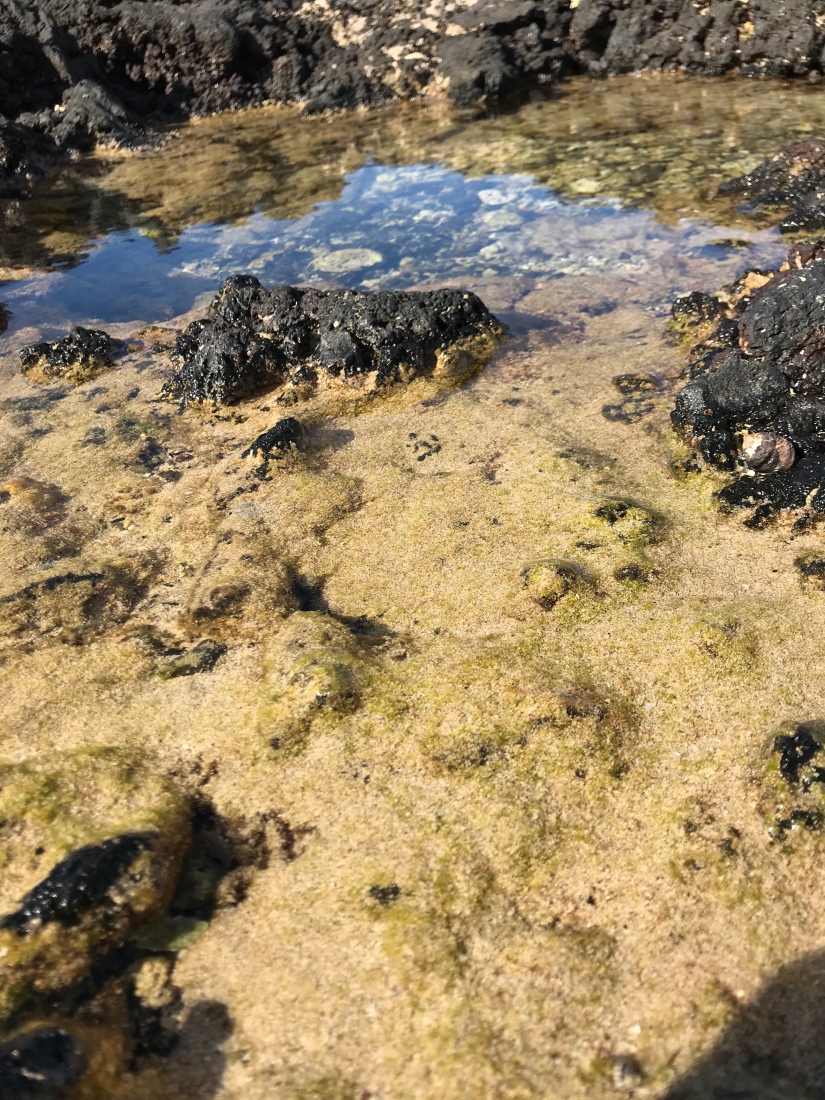 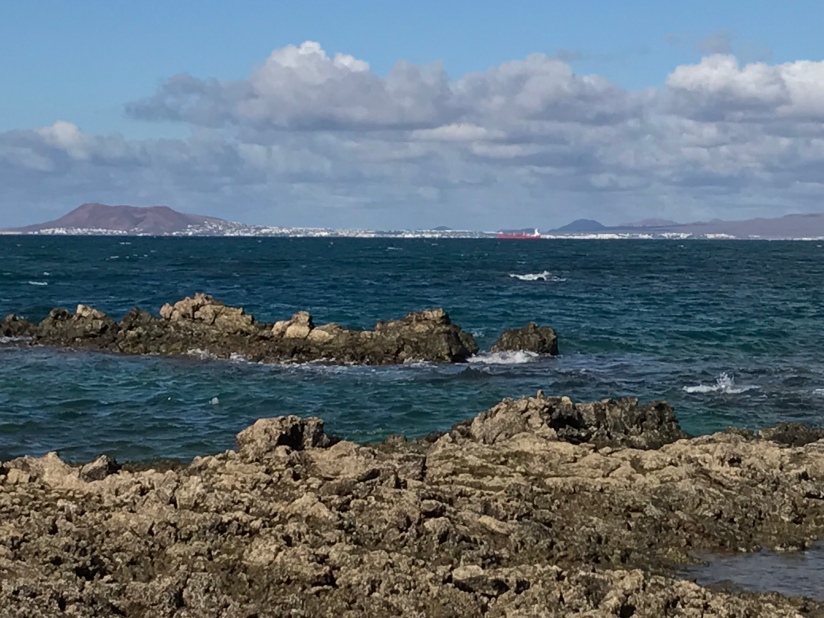 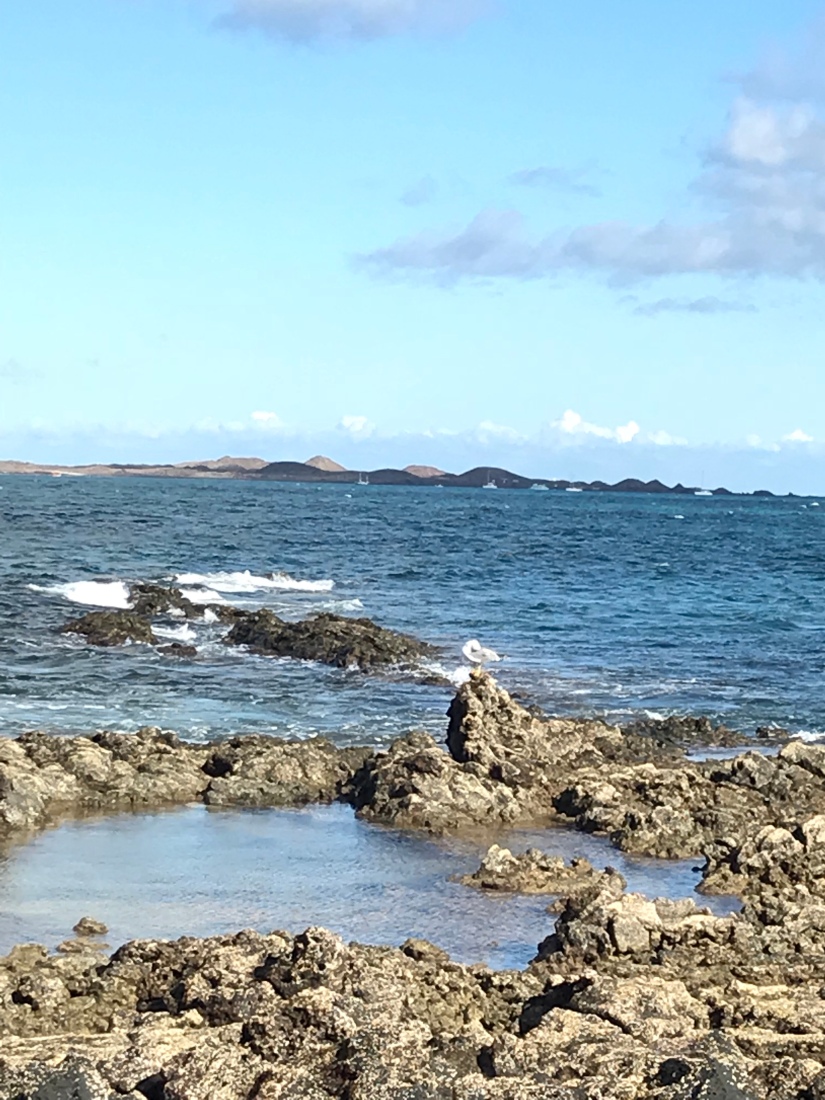 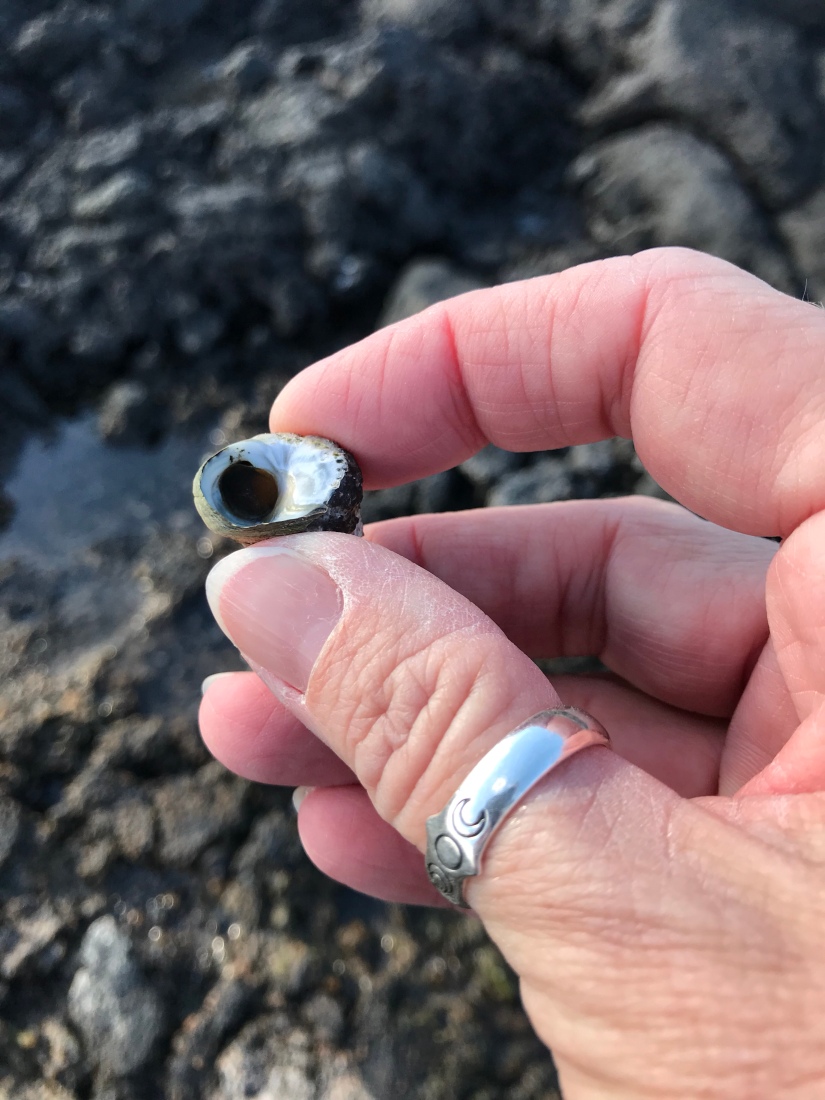 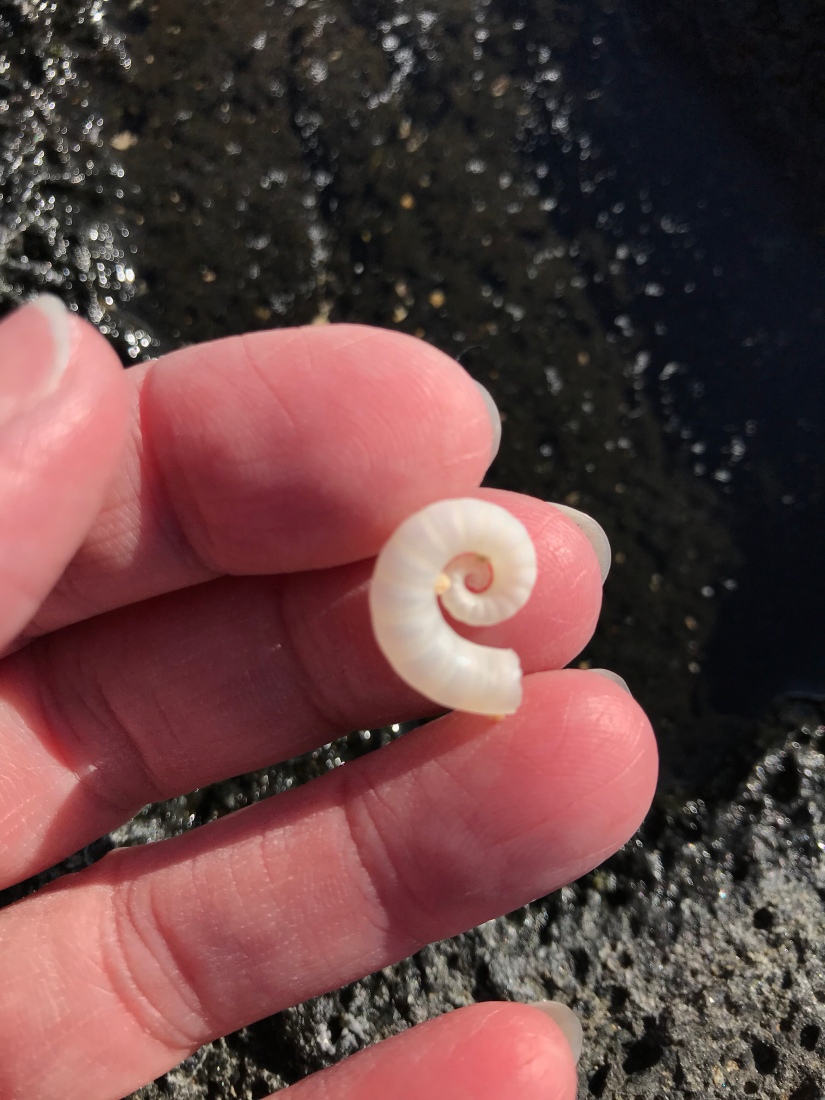 I climbed up onto rocks where Max was and started. It was amazing just how much plastic there was laying around. Max eventually left me to it, I completely lost myself, stopping to take photos, pick up more rubbish and peer into rock pools. I ended up sitting near the edge and just watching the sea.

I reluctantly made my way back to the sand and deposited my now full plastic bag into the bin. I’ve got to say, I felt pretty good for doing it. I figured I may have saved a few fish and birds from choking on plastic – not a bad feeling.

I made my way back to the hotel after saying my final goodbye to the sea, receiving a phone call from Max asking me if I had the key to the secure room as someone else was waiting to use it – oops!! Power walk!!

The pick up time eventually arrived, the journey to the airport was uneventful but the scenery was stunning and the sun was setting – I had to stop myself from asking the driver to stop so I could take a photo!

We checked in and made our way to security.

This wasn’t a pleasant experience. We just got hassled the whole time to hurry up! It’s not something you can do quickly, you have to take your time, think about what you need to take off and get out and put in the tray. The experience at Gatwick was a lot more relaxed. This was not!! I was flustered and panicked so when I got stopped after my handbag had gone through I wasn’t surprised I’d forgotten something! However, I wasn’t prepared for what they found – a knife and fork at the bottom of my bag and 2 bottles of water in my backpack!! See!! Hassled!! It all got confiscated and we were luckily allowed through. The amount of eye rolling my boys did they could have won the World Championships!! They despair about me. If anyone is wondering why I had a knife and fork in my handbag it was from my lunch at work and incidentally they weren’t picked up at Gatwick!!

We made our way to the departures area – the whole while being told how lucky we were that we were allowed through and how could I have a knife and fork in my bag??! You’d think my own children would know how scatty I am!!

We indulged in a Burger King for our tea, mainly because there wasn’t another option, which pleased them anyway. After I’d eaten I went for a wander around the shops and bought a few bits.

Eventually our gate was announced and the stampede ensued. We relocated to another chair to wait.

Boarding time arrived….or so we thought.

Everyone queued up. Then the announcement came. There would be a 45 minute delay to boarding due to a security check. Everyone sat back down again. After a while there was another announcement, we were asked to go back to the boarding gate. It was the Captain this time, he started to talk over the microphone but no one could hear him properly so we all had to move closer. Anyway, it transpired that there was a dent in the wing about the size of a fifty pence piece, it was bigger than was allowed in order to fly. We weren’t going anywhere.

After this announcement there was quite a bit of confusion, too confusing to even write about. I tried to stay calm, it was out of our control. We just waited for a definitive answer to what was going to happen. The inevitable happens, different stories start going round, people are angry, confused and a little scared (that was me, but I think I hid it well). This had never happened to me before.

Max actually said he was pleased it had happened while he was with me, at least he would know what to do and how to handle it if it happened to him on his own. I should say here that Max suffers with depression and anxiety. I’m very proud of him, he copes extremely well. Another reason for me to stay calm and composed and make light of it all. I tried to explain to him, it was out of our control, worrying wouldn’t help and we just had to patiently wait for them to tell us what they had planned.

This they eventually did. They asked us all to line up and they issued us with a €10 food and drink voucher each. We went off and got ourselves some sandwiches and some water, we didn’t know how long we were going to be waiting.

After a while and after checking out where the best place would be to sleep, we were called back to the gate. They told us to go to another gate where we would be able to pick up our luggage which had been unloaded. On our way down to the baggage claim they handed each family and group of people a boarding card that had a bus bay number and the name of a hotel written on it.

We claimed our luggage and made our way to our bus. I asked how long the journey would be – about an hour.

I have to say, the whole time I had been thinking what a logistical nightmare!! To arrange food vouchers, hotel rooms for everyone and bus transfers, I thought rather them than me!! But they did it, it all took around 2 hours from cancellation to bus. I was very impressed and I told them so.

We eventually set off, everyone had gone quiet, we were all exhausted. I googled our hotel, it looked quite nice and it was right on the south coast! We had been staying in the north and the airport was in the middle on the east coast. I had a look at google maps to see where we were up to and we only had about 15 minutes to go when we saw the reflection of blue flashing lights coming up behind us. No. Surely not? Yes! They did!! They stopped the bus, boarded it and checked all the drivers paperwork and made him get off and check outside! We couldn’t believe it! It was neatly 1am and we should have been landing in England! But, it has to be done I guess. We eventually continued, dropping the first lot of people at a hotel and then 5 minutes later we were dropped off.

We went in and duly queued up and waited to be allocated our room. It was all very efficient. We were given a Master Suite, 2 bedrooms and a living area, Sam got a room to himself and I shared with Max. We had a quick look out of the window, you could actually walk outside into the grounds. It looked beautiful, even in the dark and best of all, we could hear the sea – bliss. I couldn’t wait to see the view in the morning. I think maybe I was a little too excited given the situation we were in but, I like to try and find the positives when things happen that make me want just sit down and cry, it wouldn’t have done any good and it no doubt would have brought on some more eye rolls!!

We didn’t know what the next day held, we just knew we were tired and we were lucky enough to be sleeping in beds and not on chairs in the airport.

I eventually went to sleep thinking of the sea. Of course.