So, I’ve had a holiday. It was fab. Not on my own either, which was even better. Not with a boyfriend either – he’s remaining elusive🙄 – it was with Viv, my best friend, my rock, my Yoda (for which I seem to have selective hearing😂)

We went to Majorca. I’ve never been before, Viv has and recommended it so did all the booking.

The day arrived to travel, we were very excited, travelling with no adults though but Viv edges ahead of me on the grown up front so I’m always looked after😋

It was an early start that began with hunt the parking space, followed by cooked breakfast and a bucksfizz – after Viv relaxed getting me through security (having previously been stopped for possession of cutlery in my handbag on my Christmas holiday with my boys)

The flight boarded – a flight like no other I have experienced – it consisted mainly of hen and stag parties, groups of same sex not necessarily a hen or a stag, families and us two. The group of lads sitting around us were 18 and on their way to Magaluf and the drinking had started – thoughtfully encouraged by Viv – me, I go into mother mode🙄but loved their attitude. I’ve never had a holiday like that, when I was that age I was married – probably part of my problem now!

Highlight of the flight was a guy walking down the aisle in his pants and t-shirt with a tutu on ‘camping’ it up, brought a smile to everyone’s faces😆

After we landed we eventually found our transfer coach, settled and ended up waiting an hour before we set off, dropping people off at various hotels, I joked at each one “this is where you could have stayed”😁 Cala d’Or looked lovely! Sadly our hotel wasn’t there – ours was the last drop off, end of the line – well, it felt like it when we saw it. Big huge hotel called Club Romani.

We’d been on the coach a total of about 3 hours, I’d been feeling blergh for a while, I don’t do coach travel very well, my saving grace being we were sat at the front so actually being at our destination outweighed thoughts of what we’d let ourselves in for.

Check in was brief and not over friendly. Wristband was attached and the ‘tax’ was duly paid. We made our way up to the 3rd floor in the lift – both of us pretty quiet with our own thoughts – found our room along the white tiled corridors, went in through the door…only to find two more front doors..ours was on the left.. A. In we went – even more quiet now. It was basic. Two single beds, desk, tv and balcony, bathroom, fan on the ceiling.

We still didn’t say anything. We were too tired and we’d arrived later than we thought we thought we would due to the tour of hotels on the island 🙄 and we had a football match we needed to get ready to go and watch.

I guess the whole feeling came from walking into a new place and not ‘belonging’. When you go out and come back it feels like you’re part of it and when you see others arriving it’s the same, they are the newbies then.

We quickly got freshened up and ready for dinner, although we were all inclusive we decided to have dinner in town while we watched Belgium v England in the World Cup. It wasn’t far to walk, 5 mins stroll, and we soon found a sports bar that had 7 screens in various places but we opted to sit outside on the pavement. Dinner and beers were bought and eaten and we were ready for the match….we lost, but it didn’t matter, we were through to the last 16 – fab! 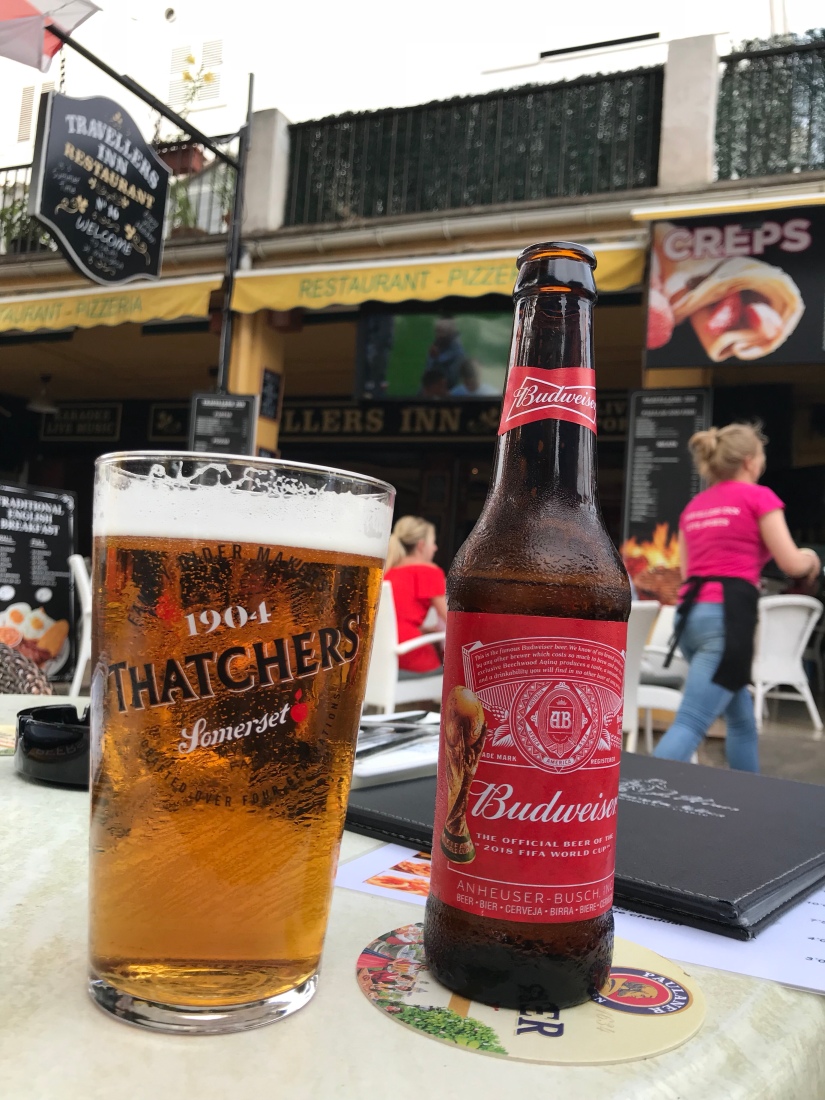 We were shattered. We slept well and got ready for breakfast and made our way down.

It was organised chaos. People going in all directions, collecting plates, food, toast, fruit, cooked food, cold food, so much choice. We didn’t have to wait for a table, and that was the same the whole week, the tables were constantly being cleared.

We had three meals a day, food never ran out, nothing ran out, it was fab. We would sit there at each meal time and not talk to each other – marvellous!😁 – instead we would just people watch. It was people watching heaven, we didn’t know where to look first. It’s quite funny how you watch people and you get a little story going in your head. We’d occasionally speak to each other to say look over there or look at them😊

It was like that wherever we went, inside the hotel, around the pool, in the bar. There were after all so many people and children!!! Children!! 😩 If I’m honest it was the kind of hotel that as a family we had avoided, I’d never had a holiday like this before and the result of it is we will be going Adult only next time, my dream being Barbados❤️

We soon settled in and settled in to a routine, up for breakfast, bikinis on, down to the pool to claim a sunbed then in to breakfast before coming back out to cream up and lay there, listening to music, either our own or the music being played around the pools. We would surface for drinks from the bar, they had cocktails on tap (of which I had a few🤪) Viv discovered Malibu with coke slush-I moved onto Malibu and lemonade – Cup was bigger 😋 and for lunch we’d muster up the energy to walk there and eat. It was all so much hard work, so stressful – my kind of stress 😃 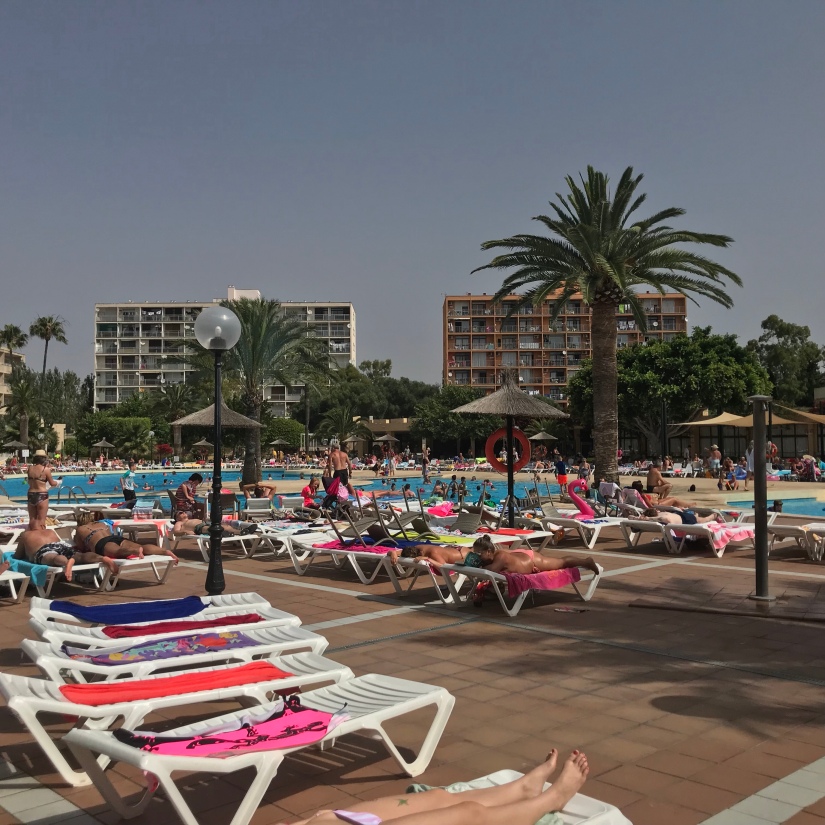 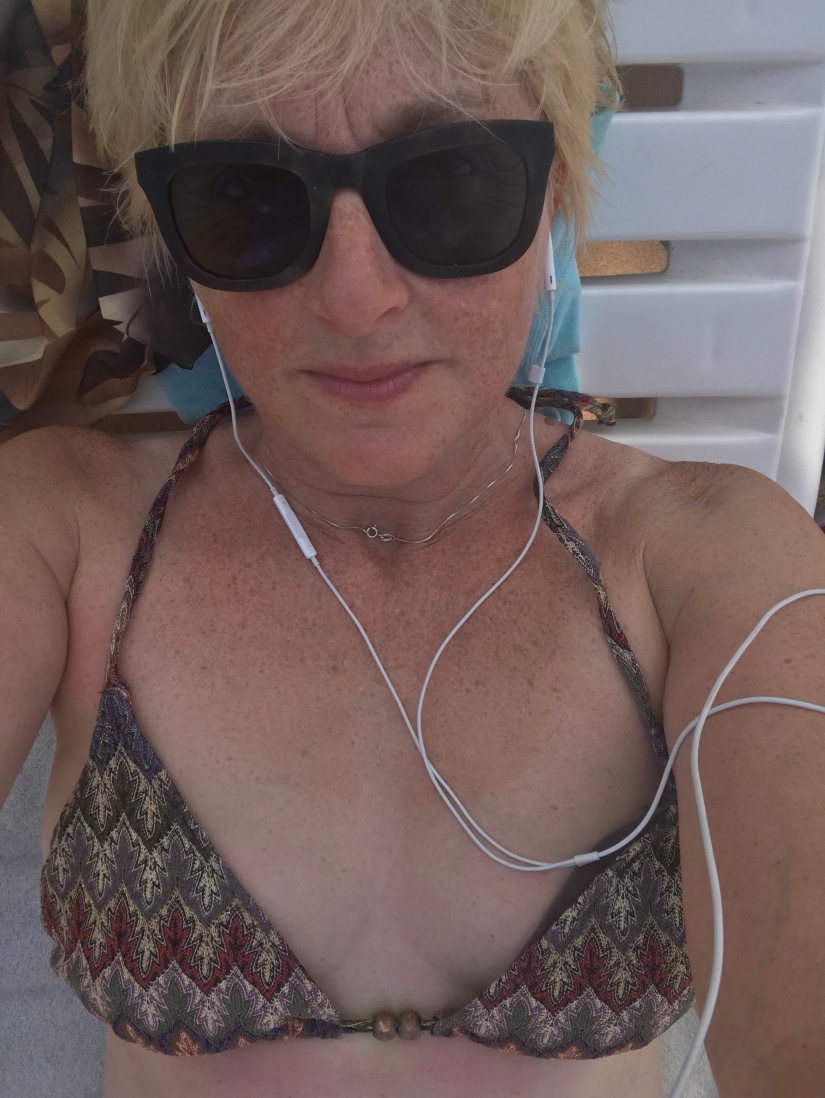 We couldn’t quite find the energy to do Aqua Gym, in fact the whole pool scenario was an effort. It was so busy you couldn’t actually swim anywhere, we stood in it to cool down mainly. Viv said it was as if people were just chucking kids in left right and centre! They were jumping in from all directions! We soon made our way back to the sun beds – our sanctuary. The afternoons ended in us packing up and going in to watch the World Cup on the telly, whatever game was on. I have to say I absolutely loved it! Really enjoyed the whole tournament and it was especially different watching it with all nationalities.

After football it was shower, getting dolled up and dinner, followed by drinks and the occasional Karaoke – which Viv tried her best to talk me in to but to no avail. The entertainments staff were brilliant, constantly smiling and keeping people happy – too much like hard work for me. Everyone had a great time each night.

The days continued much the same, the biggest excitement being the pool getting evacuated due to ‘something’ being discovered😱💩😷🤢 the water was very calm and still for a few hours!! We made the effort – and it was – to visit the beach, which was a 10 min stroll down a path from the hotel. It was everything I’d feared. Bodies everywhere.

Take away the people and it would be perfect (another dream). We found a bare patch of sand that just fitted our towels and made our way to the water. This too was busy with people everywhere. We got our foofs wet, I was holding onto my bikini bottoms fearing the worst, then made a swift exit and lay on our towels. We lasted about half an hour then packed up and walked up the hillside. I managed to get a few pictures on the way. 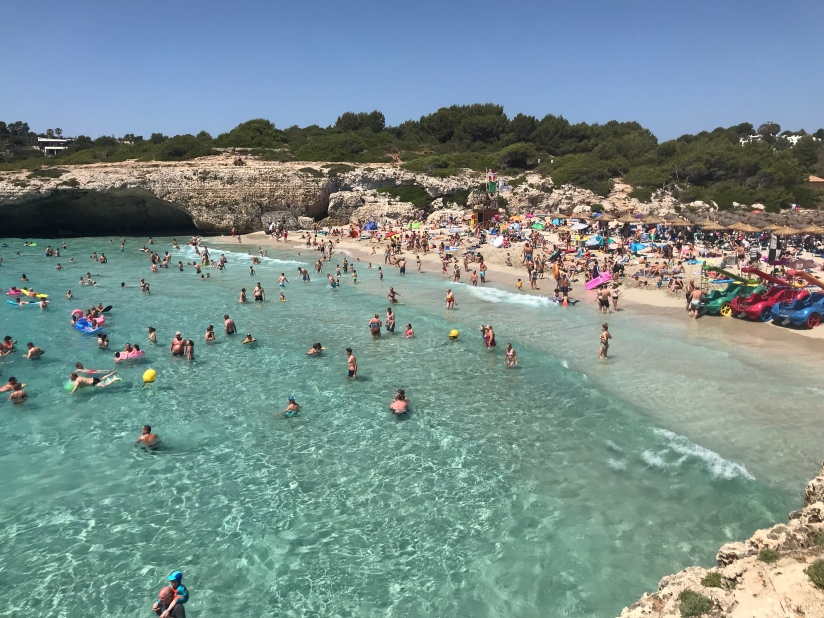 At the top there was a land train which we managed to get on, it took us through the town, past our hotel (we’d decided to stay on for the ride) and on to a couple of other hotels and resorts – one being called Club Tropicana😁 where the drinks are free 😉😋🎶

We got off when it got back to town and we made our way back to the hotel. It had actually been nice to get out for a bit.

The day of England V Columbia dawned. The plan was to go to the same pub we’d watched the Belgium game in. We watched the football in the hotel first then got ready really fast and hottailed it to the pub, fearing that there would be no tables – but the same one we’d had previously was vacant, food was ordered and cocktails were bought. I had Sex on the beach (finally) and Viv had Viagra😆 we had a few of these 🤪 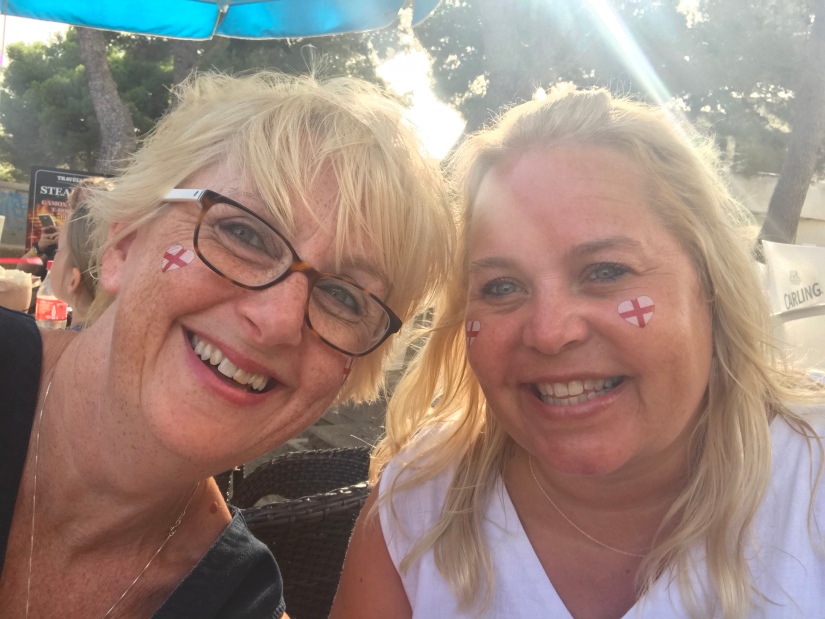 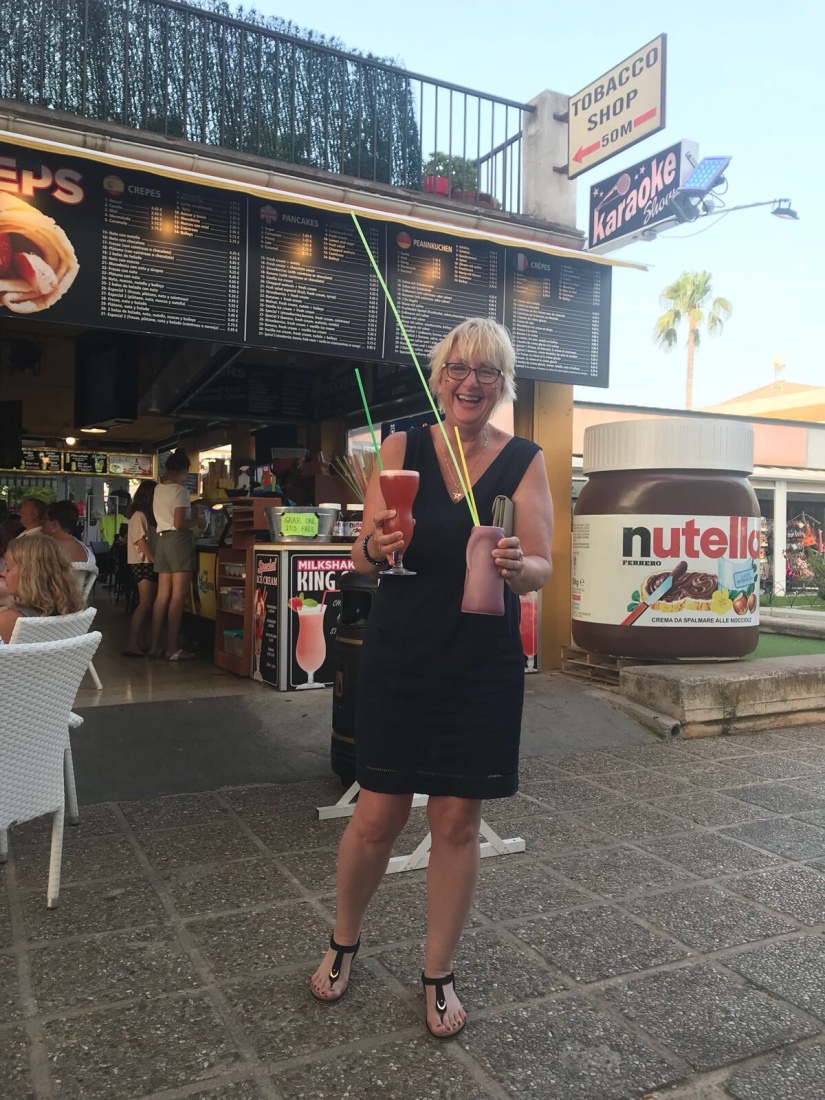 The excitement built, the group of girls on the table next to us were passing ‘judgement’ on the players as their pictures were shown for the line up😆 stating whether they ‘would’ or they ‘wouldn’t’, I told them to look out for Jordan Henderson….. apparently he was a ‘definitely would’ ( I said “told you” to them😋)

Brilliant game, dirty game, exciting and unbelievably nerve wracking, extra time AND penalties!!! Oh England!! What are you putting us through!! Again!!! I could barely watch!! I videoed the last penalty being taken….. which he scored and which meant we’d won!!!! The bar went nuts!! I went nuts, Viv went nutsier!!😆 Fanbloodytastic!!! Everyone was cheering, a random Irish guy hugged us both, he’d been chatting with us through the game. It was just brilliant.

The day came to depart, we weren’t flying until 9.30 in the evening so we had one last day by the pool to work on the tan.

The coach trip back was a direct route and was infinitely quicker. In fact the whole journey went very smooth. We saw the same lads on the plane, they’d had a great time but were shattered – can’t think why!

We made it home in the early hours of the morning, we had the day off from work thankfully and the rest of the weekend to recover – except we didn’t stop, the football was still on so of course had to go to the pub to watch it!!

The holiday had been fantastic. Just what we’d needed. Simply lying by the pool doing nothing but recharging our batteries and taking stock.

I need to go again, somewhere. My wanderlust is back, I lost it for a few months, but I’m itching to go away, even for a weekend, I just need to work out where I want to go. The problem I have is that I enjoyed my trips when there weren’t so many people about, now the weather has brought them out and finding a spot to yourself anywhere gets harder. But I will think of something, I’ll find somewhere, watch this space.😊

3 thoughts on “A Holiday”