I was awake. I’d managed to sleep a bit but you never can settle when you know you’ve got to be up super early, I had to get the bus to the Terminal. I was downstairs waiting nice and early. I bought a return ticket at the machine and stood and waited. I decided to go through my bag and check for things that weren’t allowed having previously had a knife and fork in my handbag – don’t ask🤪

I was so engrossed in doing this that I didn’t notice the bus pull up – by the time I grabbed my suitcase he was on his way! I had to wait for the next one. This time I waited outside, bit chilly but not unbearable and only for 20 mins.

It arrived, we got on and continued the rounds of the other hotels. One hotel an entire family got on with about 7 rather large suitcases! It was only a small bus! I was trying not to panic thinking I’d left it too late especially when we stopped at another hotel with more people!! It eventually stopped at my terminal, even though I couldn’t quite see where it said terminal 2, I had to rely on another couple to tell me – god I feel old and incapable sometimes🙄

I made my way in and found out where I had to check in. It was to be an automated check in.

Does anyone remember the old days when you got your ticket in the post and checked in when you got there. I’m not sure what these self drop machines save?! You get your luggage tag and scan your passport – Then you still have to queue to drop the bag and show your boarding pass and passport to a person!! I don’t get it!!

Anyway, I managed it and made my way to security….dreaded security….I’m not great at this point. I can never, ever remember what needs to come out of your bag, what clothes you have to take off or anything!! The guy kept me calm, I told him I always panic at this bit so he helped me and I walked through without a blip and no one needed to cop a feel😜😂dammit!

I then thought it was the passport bit, but it wasn’t, I was done!! I’m sure I will have fun with that bit on the way back.

Now it was time for breakfast, scrambled egg on toast, to be finished just in time for the boarding gate to be announced.

This turned out to be a long walk!! About 15 mins!! I never use the travellators either, always prefer to walk and try and use the stairs too – I figure I’m going to be sat for a few hours so I make the most of movement.

Boarding went smoothly, why do they always walk you through business and fist class to get to cattle class – it’s like they’re taunting you, this is where you could sit if you had money! Although, I have to say I have travelled Virgin Upper class, it’s very lovely and does make a difference. Destination is the same though.

Found my seat and settled in. An aisle seat, so I don’t disturb people when I’m getting up. The couple next to me were asking if they could move to the empty seats at the back, they were told they could once the doors were closed and they were still free. They asked if I would like to go back there instead, I opted to stay, thinking I’d have space to put my feet up! Result!! Only once they’d moved and I slid over to the window another guy nipped into my aisle seat🙄 meaning I still had to disturb someone! At least I had no one next to me and I think I had more leg room too, plus I could lean my pillow on the window.

It was great looking out, especially on take off, looking down on the Thames and seeing how it meanders with promises of Ox Bow lakes forming in the future (I’ve always been fascinated by that since school – to the point where I have recently taken on an online A level Geography course!!😳) and looking up, seeing other planes leaving white scars in the fabric of the blue sky. I watched as we left our coastline behind and I think I saw a wind farm – another amazing feat of engineering. Why is it that as a species we are so clever yet we are systematically destroying and consuming our beautiful Planet? 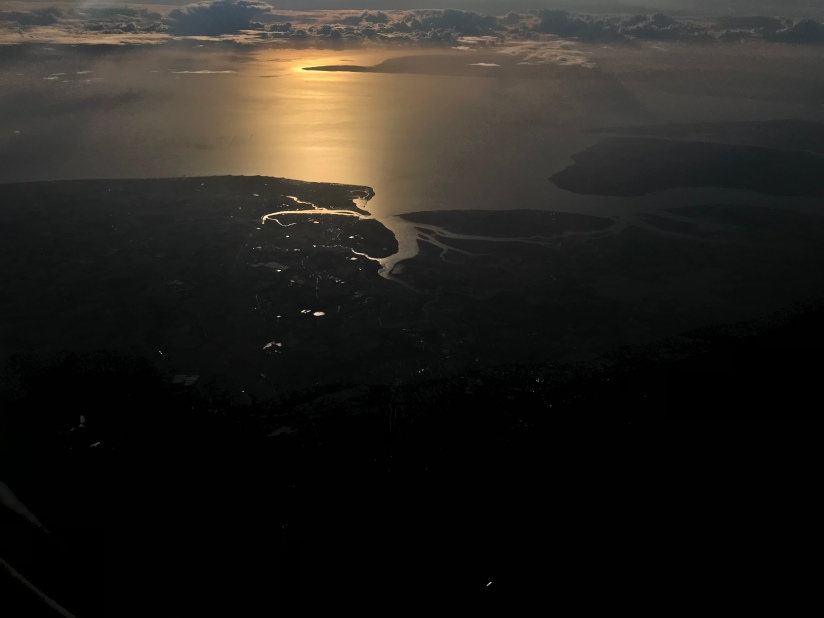 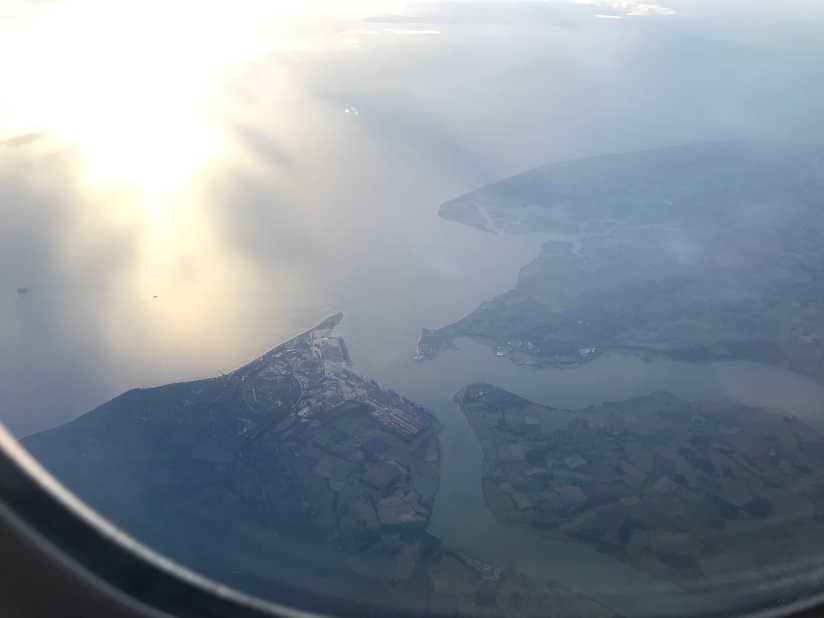 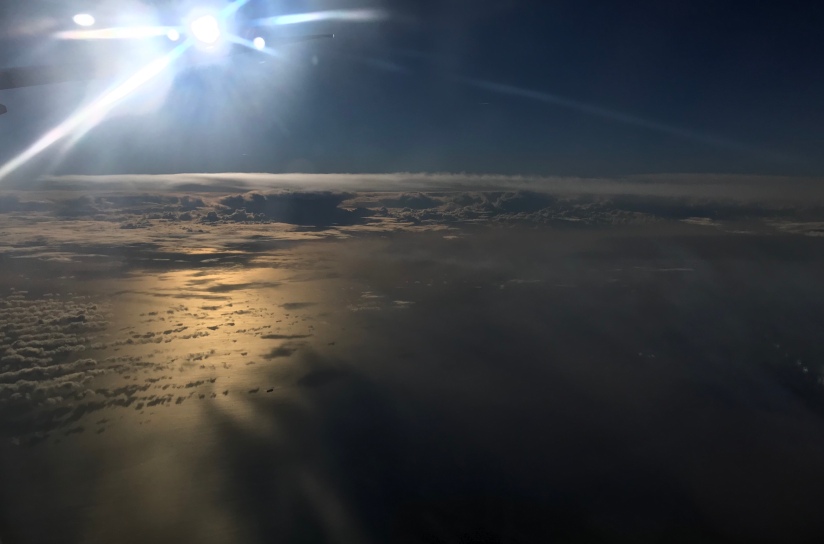 After about half an hour they began to serve food – I was told to close my blinds… why? I didn’t want to, so I didn’t, I continued to watch, it was only after I was asked again that I closed them. I wasn’t happy, and I wasn’t particularly enthralled by being fed a chicken Kiev dinner at 10.30 in the morning!! We were obviously being made to think it was evening and make us sleepy as we would be landing at 5.30 in the morning – 8 hours ahead.

I managed to doze on and off, I don’t seem to be able to watch a film, I will try on my way home as the flight is 14 hours😱and it might help time tick a bit quicker.

We eventually landed, what a relief. I took my time getting off and made my way to immigration – eventually finding it, queueing and getting to the front only to discover I had t completed a disembarkation card!! I asked the people behind where to get one and they pointed me in the direction. I think I must have missed that on the plane, I must have been dozing.

I went and filled one out and joined the queue again. I knew Richard was waiting for me, picking me up before dropping me and then going to work. It took ages, they were very thorough, taking both thumb prints.

After that I went and found my case, it had already been taken off the carousel, and make my way through the green channel. Rich was there, lovely to see him. He had a taxi booked and trying to find it was a challenge for Richard – we went up and down lifts, in a car park, out a car park – he made me feel quite competent – and that’s saying something.

We found the taxi and made the 30 min journey to the apartment complex, he showed me round quickly then shot off to work. I unpacked, had some cornflakes and coffee then went to bed for a few hours. When I got up I put my costume on and made my way down to the pool. 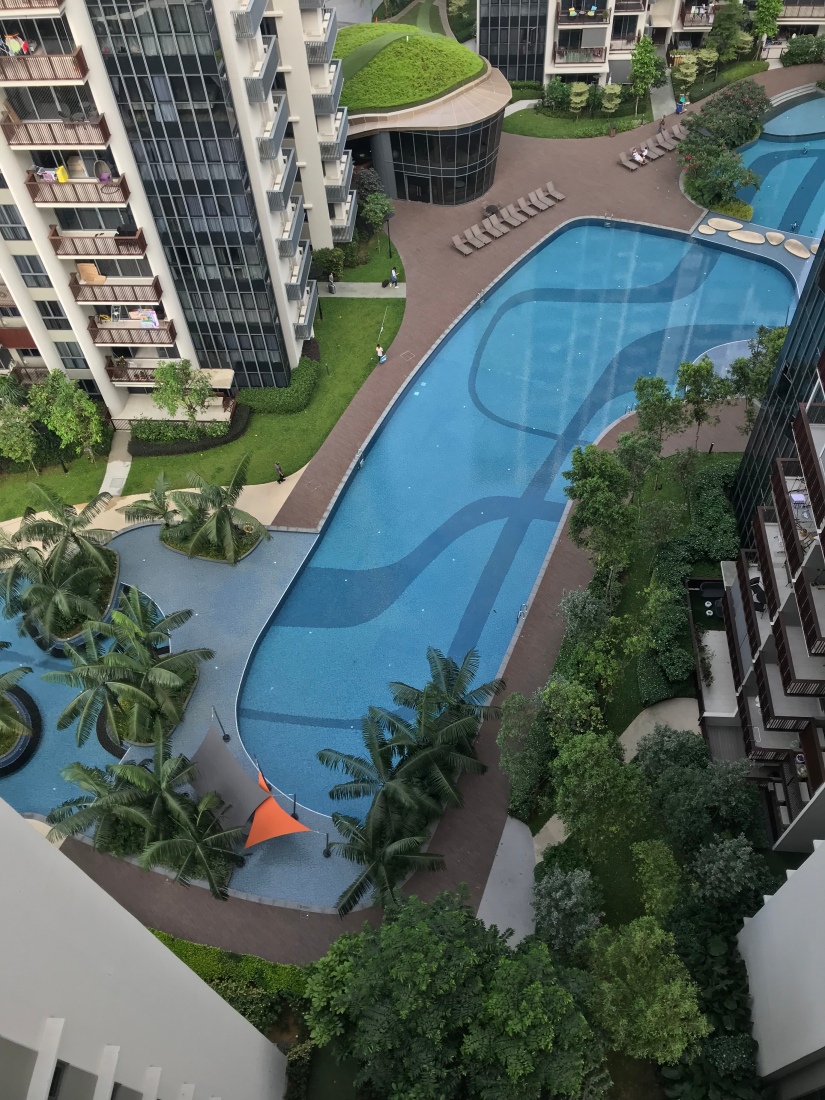 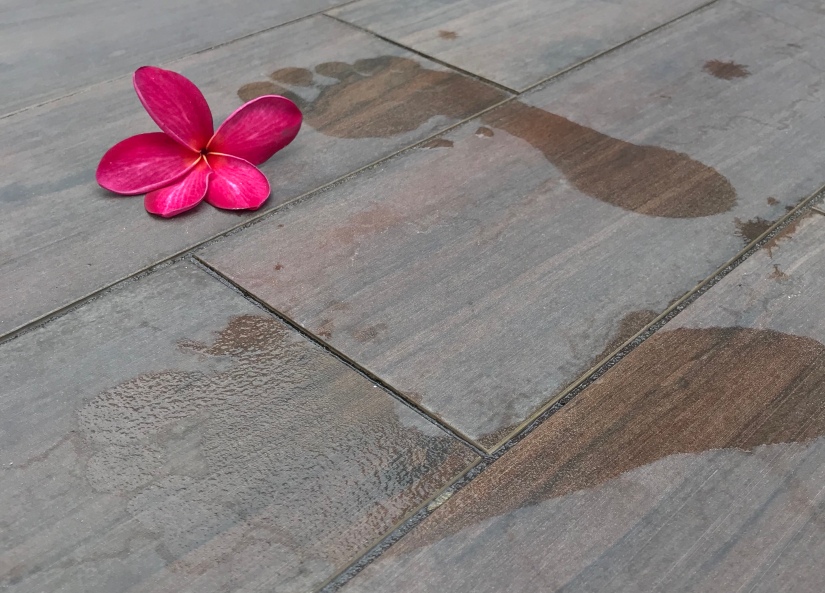 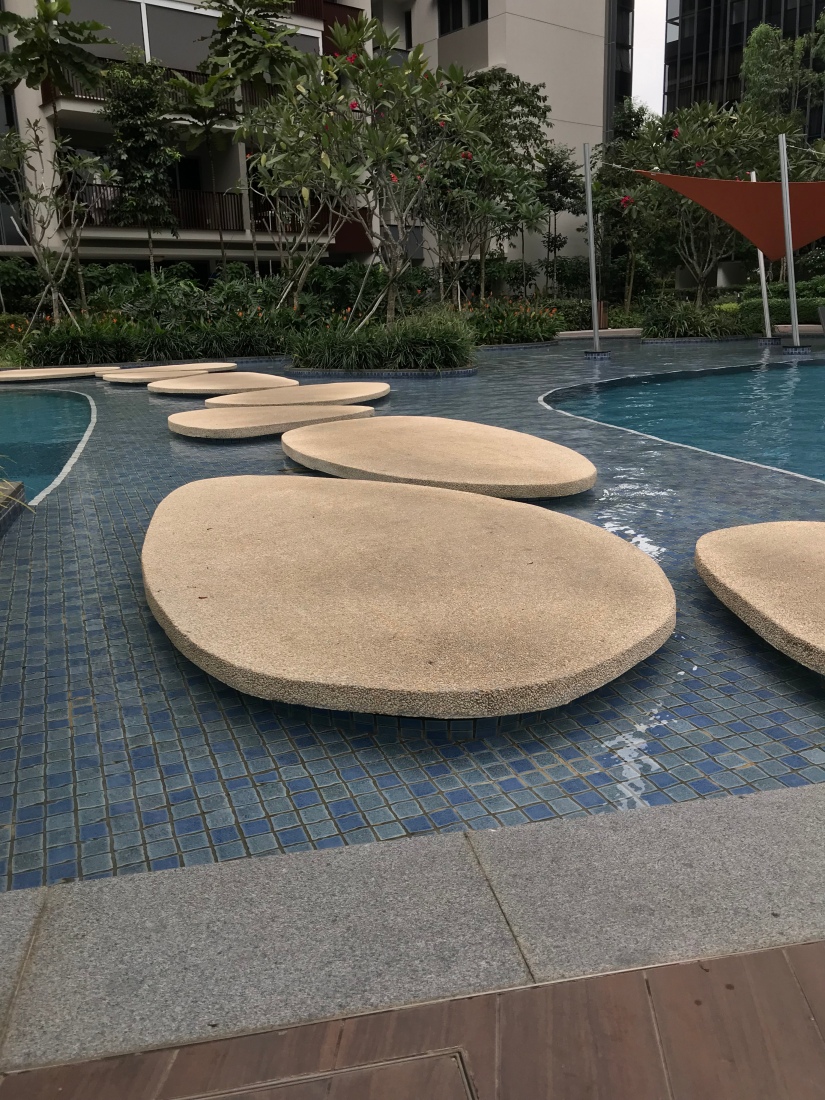 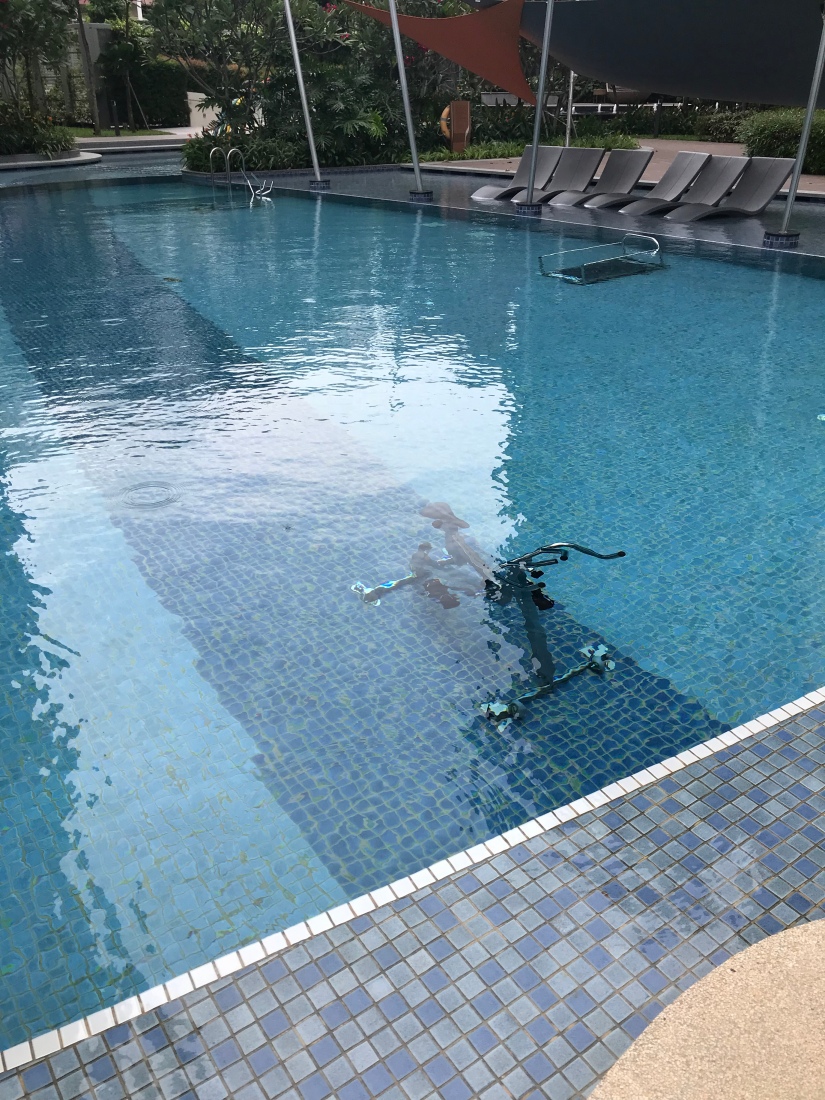 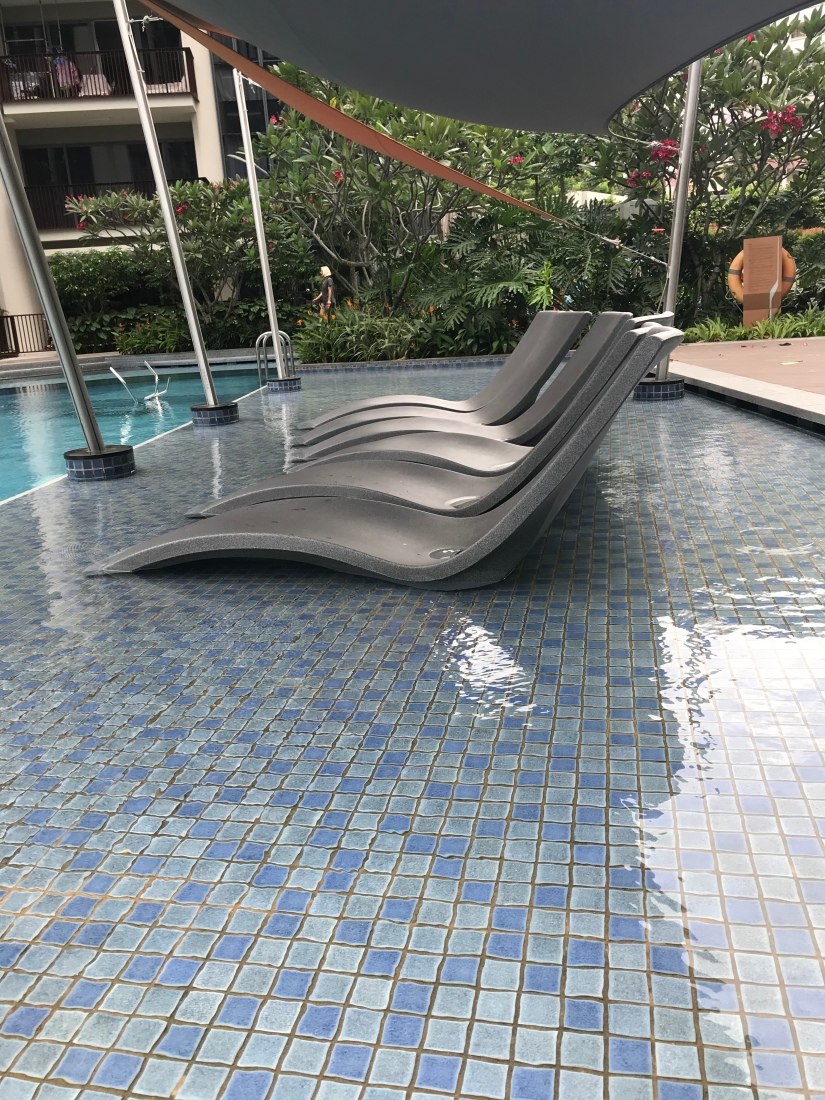 OMG it was cold!!! I still got in, controlled my breathing and set off with a bit of breaststroke. I tried putting my head it the water (thank goodness I wear a hat) but it just took my breath away. I was gutted. I really wanted to swim. So I persevered, really focused on my breathing and after a while managed to get a good rhythm going. Even when I used to dip in rivers I never put my head in, it changes everything. I’d set my watch to a 50m pool when I got in, I eventually found the points I could swim between that were 50m (my usual pool at home I swim my miles in is 15m in length, so this was a complete change) and in the end I swam my mile in 45 mins!!! My fastest yet and that was with faffing with my breathing!! I was so incredibly chuffed!! My PB at home is 54 mins just give you an idea!! 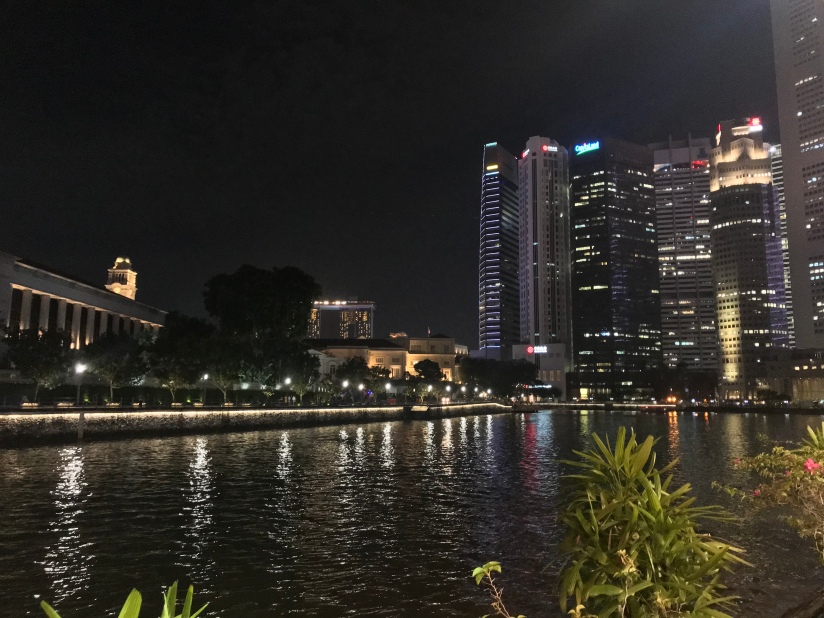 I made my way back to the apartment and got ready for dinner, Rich came back and we sat and chatted on the balcony drinking for an hour or so before walking to the metro and going to dinner. We sat next to the river and had some fab food, more wine and conversation until it was time to go. He called me a taxi and we said goodbye, he was going to the airport, flying back home for Xmas and to see the boys. I got back to the apartment and realised I was on my own – although my friend Saz has a good friend out here and we are going to meet up so I’m not completely alone. I don’t consider myself as alone anyway, I have fantastic friends who never let me feel that way. I am a very lucky girl and I am always immensely grateful for them.

So now, it’s about 5am and I’m a little mixed up with my body clock – closing the bloody window blinds didn’t help at all!! It just meant I missed a sunset in the sky!!🙄😂

I wonder what today will bring…. 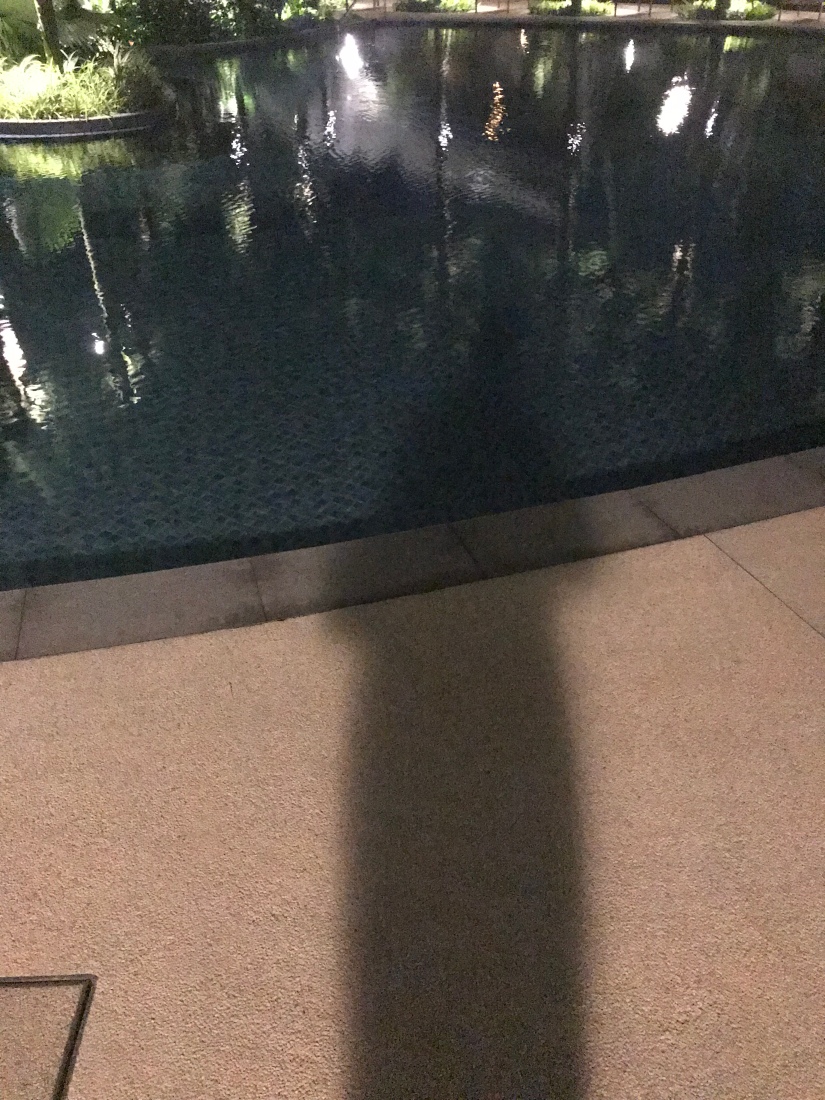 2 thoughts on “Singapore – Travel Day and a little bit more..”