It was the evening of the Stone Skimming Championships. I knew I wanted to do the trip to see the Corryvreckan whirlpool, I’d been told about it before I left and had looked at booking but I’d dithered 🙄 So now I was desperate to book but I only had the day I was leaving left!

I toyed with the idea of staying another night up there but it didn’t feel right (I go with my gut) so the only option was the next day.

I went online to book, waited for the payment code to be text to me.. it didn’t come.. tried again…. nothing! I had no signal or connectivity! I rang them but got no answer and then emailed them. The only thing left for me to do was to get up really early, pack up my car and go and see if they could fit me in.

Before sunrise! Quite something for me!! Should really do it more often!!

I quietly left the ‘Boathouse’ so as not to disturb the owners and drive the 5 minutes (ish) to Ellenabeich where Seafari Adventures could be found.

As I drove round the corner I could see a group of people near a shed by the slipway where I’d caught the ferry to Easdale the day before for the Stone Skimming. I parked up and began to walk over, counting how many people there were as I went and realising that there was possibly going to be no space for me I stopped and turned and started walking back to my car…. at this point I had a word with myself🙄🤪 what the hell was I doing giving up without knowing?! I asked my usual question – if you walk away will you regret it? The answer was a resounding yes! So I turned back and approached the group. They were putting the blue and yellow waterproofs on, they looked like a bunch of Minions (my people🤣). I asked a normal clad person if there was any chance there was a space, explaining the difficulties I’d had contacting them, they said yes! I was taken back to the shop by a young man, Tom, who opened up and took my money and my details. We went back to the others and I put my Minion suit on – I needed help 🙄 it wasn’t easy ok!!

We all walked down the slipway and waited for them to bring the Ribs in, they were using two on this day, the reason why they had a space for me, they each seated 10.

The seats were a bit like saddles, you sat astride them and held onto the handle in front – and believe me, you needed to hold on!! Especially once we’d set off and pilot did some major turns left then immediately right at speed!! He then stopped and explained why he’d done that. He needed to see if anyone reacted in any way, if anyone screamed he would have had an idea how we’d have coped in the whirlpools. But since no one did we were good to go – I did say I’d screamed in my head but apparently that didn’t count!!🤣😂 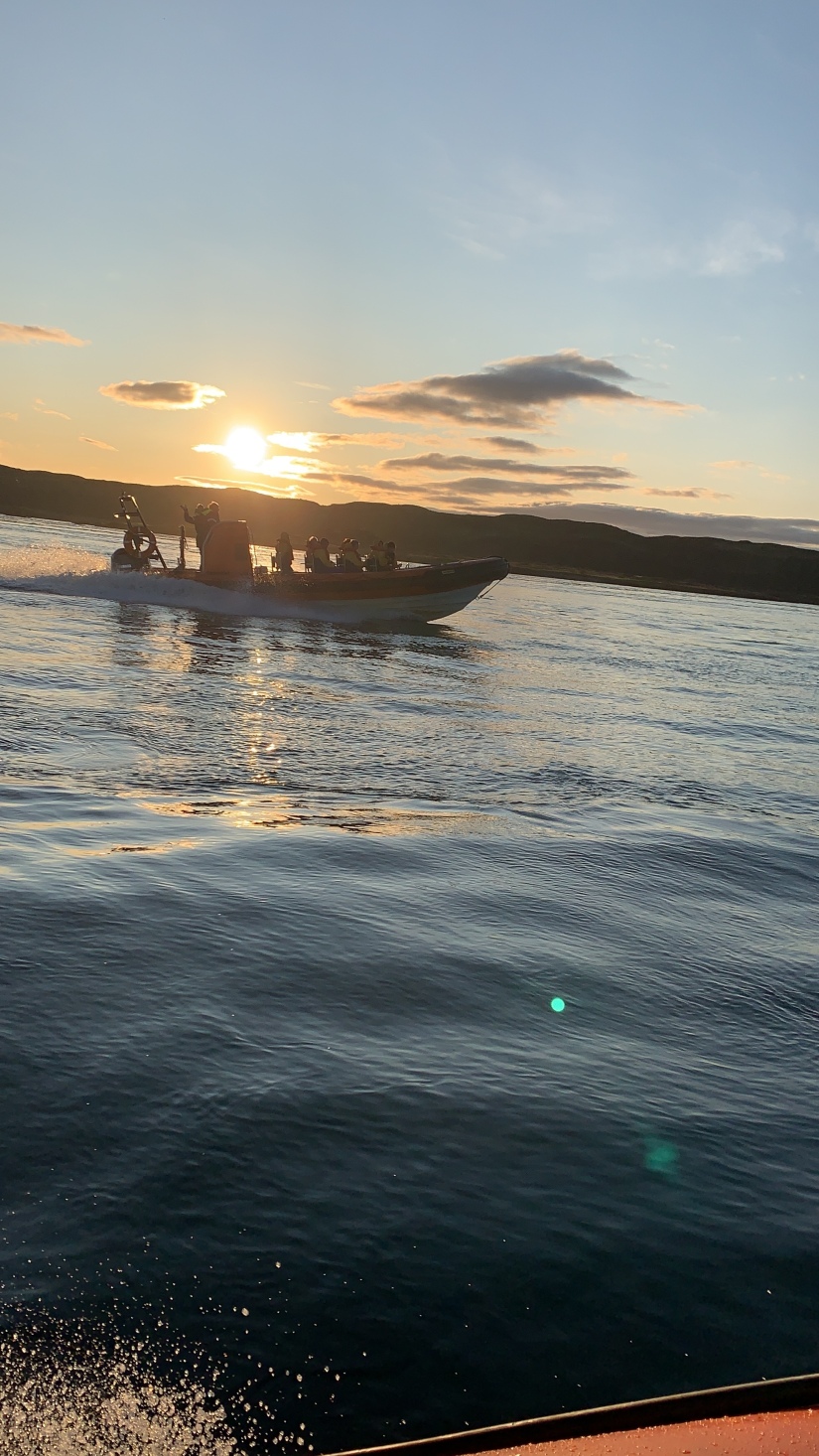 As we made our way between mainland and islands the sun was rising. I couldn’t take my eyes off it, it was a stunning morning, couldn’t have been more perfect. The smile I had on my face didn’t leave me until we landed back – even then I felt like I was still smiling, even on the inside.

We continued at speed, stopping at one point because a Sea Eagle had been spotted – magnificent in flight!!

Next stop was the Grey Dogs, a step in the Atlantic, really hard to explain but one part was higher than the other, it was like the tide was pouring in, “The Grey Dogs tidal race is a disturbance of standing waves in the strait between Lunga and Scarba caused by the diurnal tidal race there, which is of high velocity” In the strait there was a line of rocks, as the very talented pilots held the boats as steady as they could we could see through to the other side of the rocks, the water was higher on the other side, quite amazing and the water was very powerful. 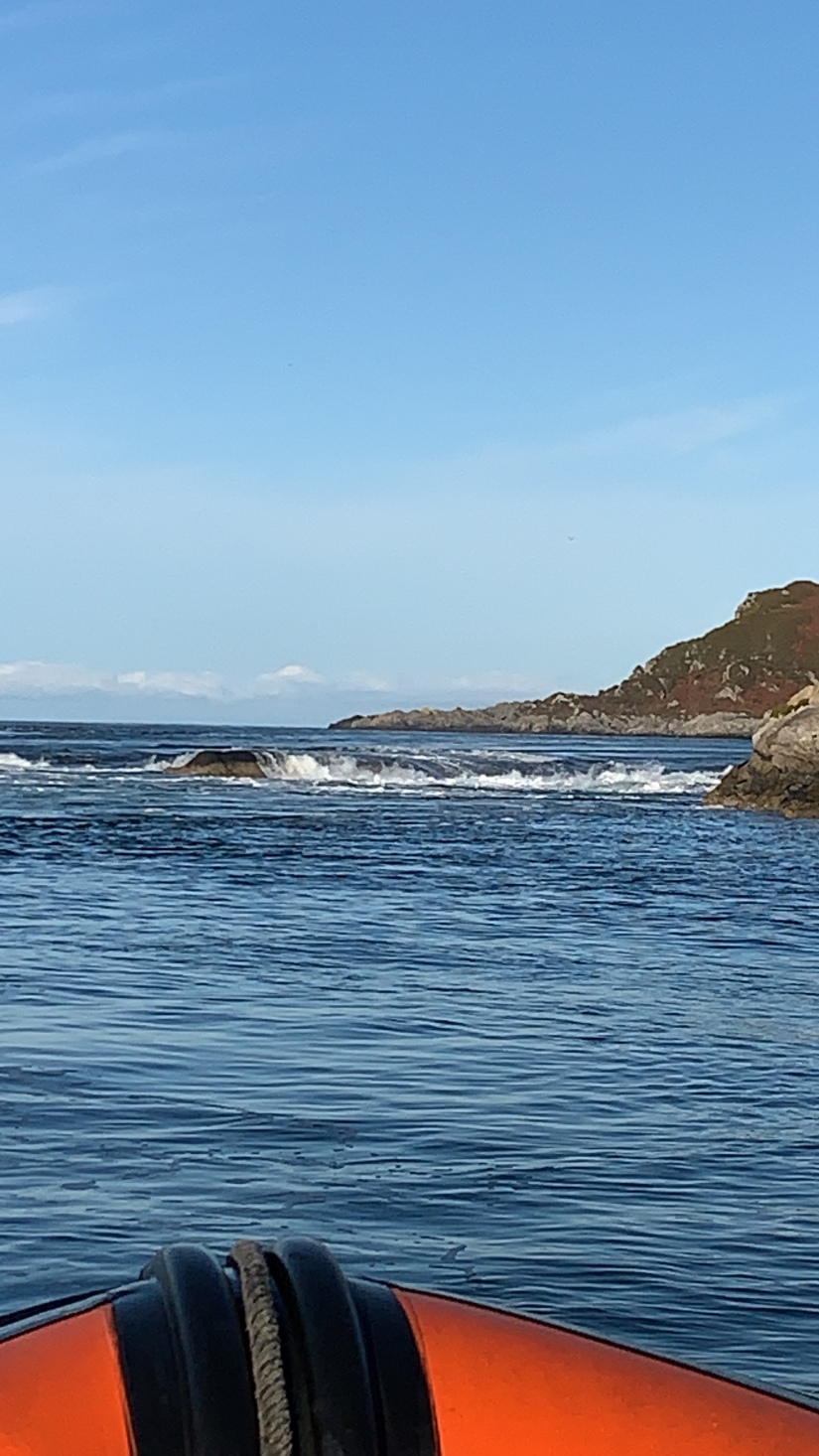 After we’d had a look the two boats continued on to The Gulf of Correyvreckan, which lies between the islands Jura and Scarba.

Now I have to say, in my mind I was expecting a whirlpool in the proportions of the one that took down The Flying Dutchman🤣, but it wasn’t, shocker!🤣 From a distance it looked flat, but once they’d manoeuvred the boats into the strait you soon realised it wasn’t.

It was a relentless frenzy of water, bubbling, frothing and whirling. If you get motion sickness easily it wouldn’t be for you. The boat was never still, it was constantly being manoeuvred, either by the pilot or by the water. The pilot would be on the lookout for potential whirlpools and once spotted go speeding off to sit on top of it and just let us be spun around. You were constantly looking for the next one, sometimes they’d appear, other times they would just fizzle out. 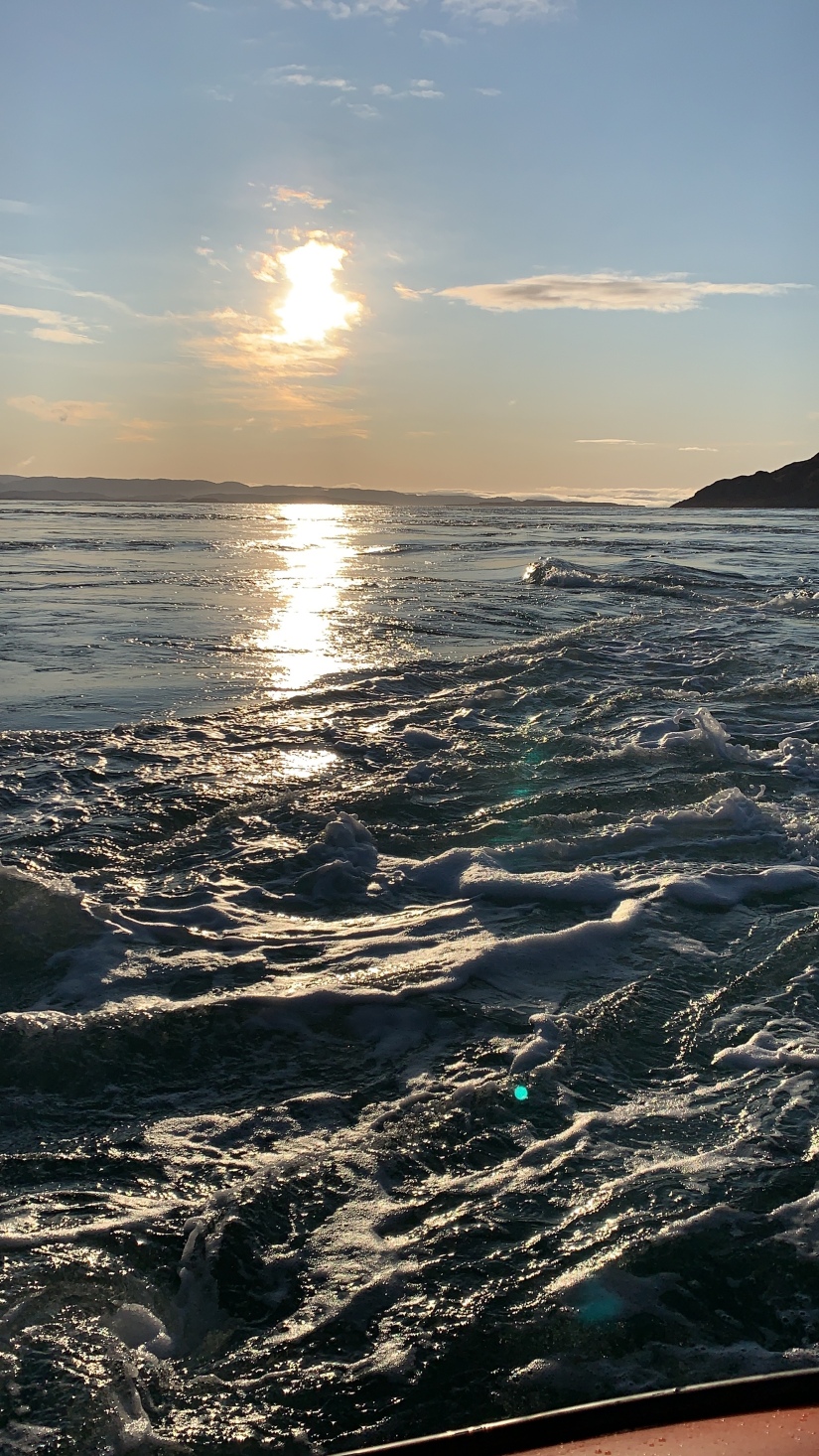 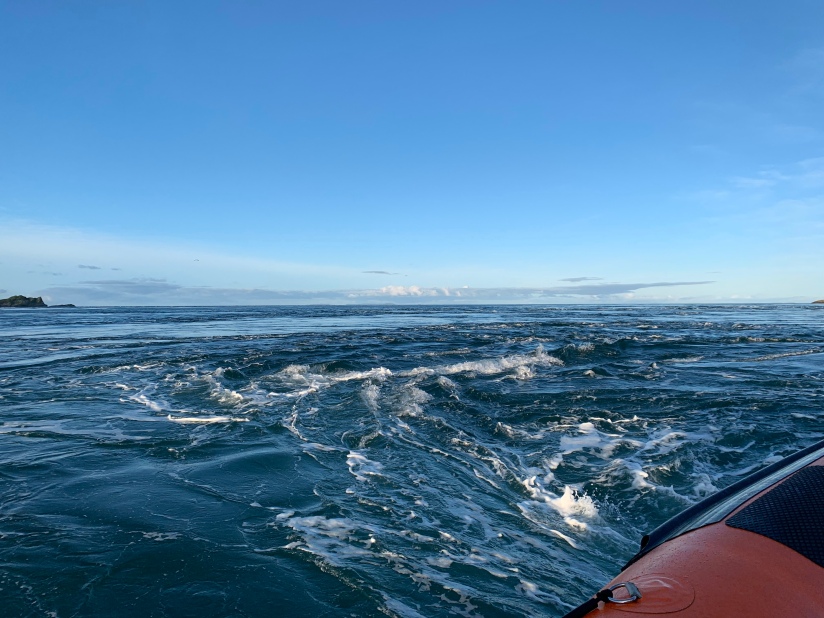 It was an astounding experience. The sky was blue, the sun was blessing us with beautiful reflections on the fizzing water, quite stunning. The land either side of us was hard to focus on but it was gorgeous. After moving to a quieter spot we were able to spot deer on the hillside, standing majestically watching, no doubt thinking – more tourists 🙄😂 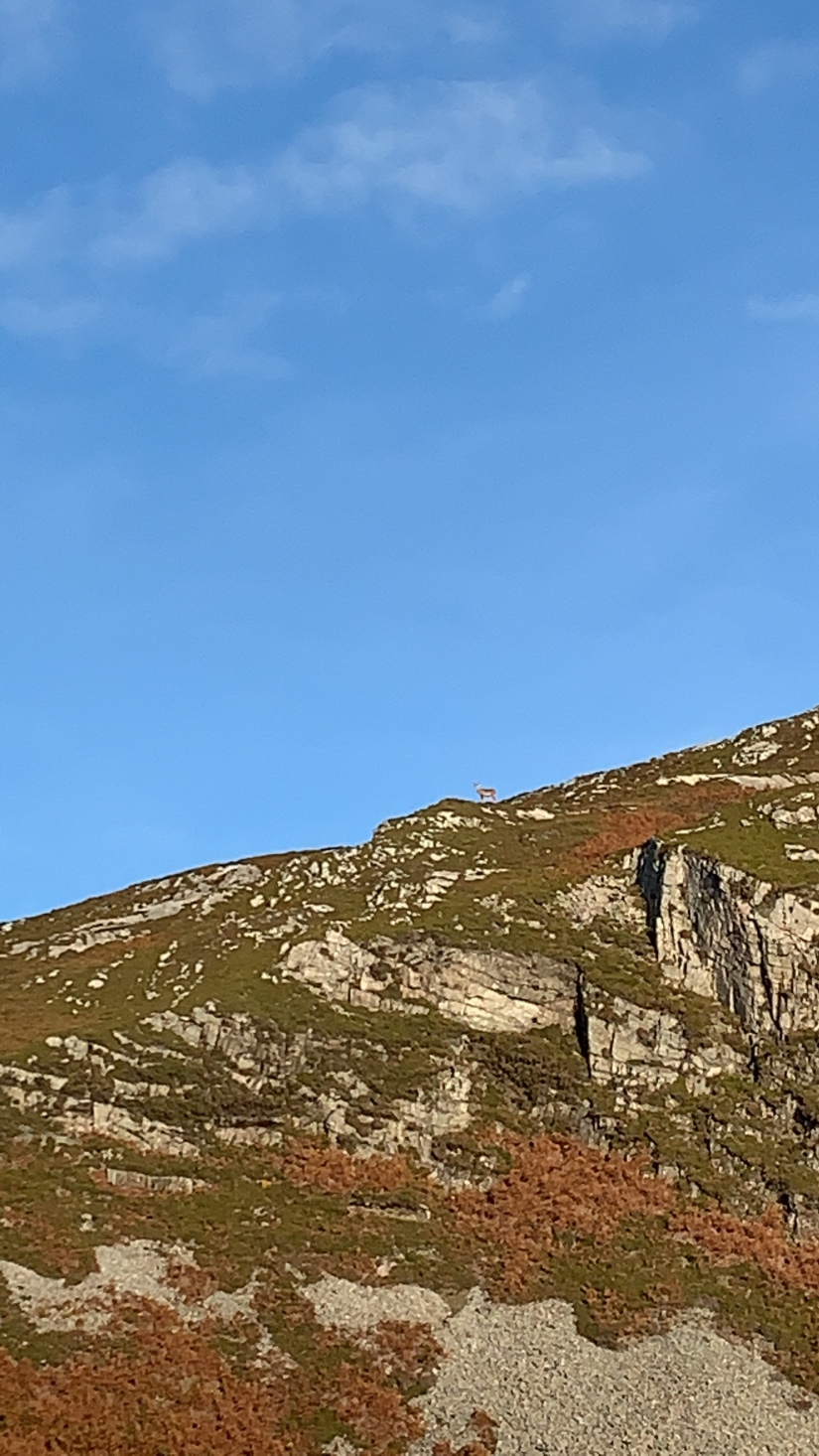 We spent quite a bit of time chasing the whirlpools, sometimes with the water splashing over the side of the boat. I was holding onto my phone for dear life while I took photos and videos, I would have been devastated if I’d dropped it in!!

Once we’d finished chasing the whirlpools the ribs were soon heading out of the Correyvreckan Strait and around the other side of the island – I don’t know which is which, I get very confused when names are thrown out about different land masses, it’s the same with hills and mountains, if someone could just label them that would be great!😂

The smile was still on my face, I felt quite free and Very happy, so glad I’d done it.

The boats eventually arrived back, going past Easdale Island where the Stone Skimming had taken place the day before and they pulled up in turn to deposit us on the slipway and relinquish our ‘minion’ suits (yes, I needed help, someone had to pull it over my head🤦🏼‍♀️🤪)

I thanked them again for allowing me on at the last minute, great customer service, I would definitely go again and even try one or more of their other trips they run. 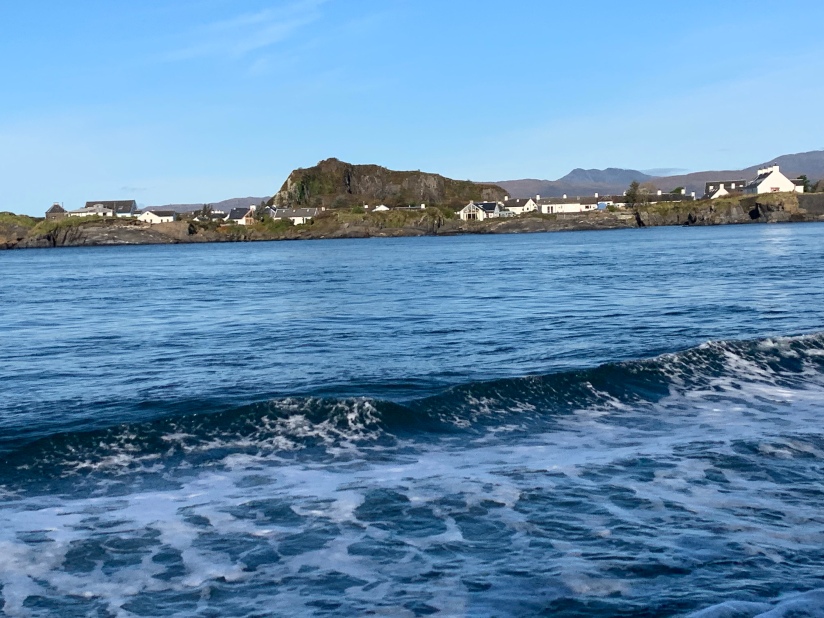 Vinnie was waiting where I’d left him a few hours earlier, we had a very long drive ahead of us, even though I had no clue what my next destination was! Even now as I type that I can feel the excitement, just jumping in my car and driving with no fixed idea of where to go, so free, no one to answer to, no one to change my mind, no one to make me doubt myself – I do that enough already – I’m really beginning to enjoy that, but maybe a little too much🤔